Birthplace Pedigree, or WOW, Did My Ancestors Travel!

Of course, I had to jump on the bandwagon in creating a birthplace pedigree chart! For "extra credit," I went to six generations, only because all of my lines migrated so much! 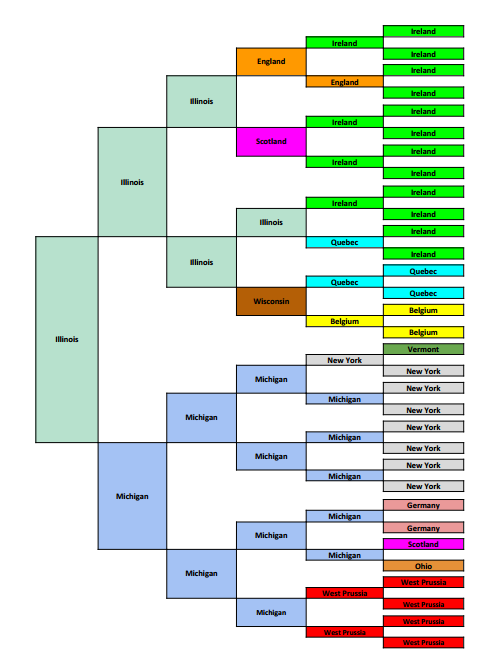 Thanks to Cheri at Carolina Girl Genealogy for posting this on Facebook and to those who made the template!

Posted by SallySearches at 11:08 AM

Last week I had the opportunity to wander around the University of Chicago, one of the preeminent universities in the US.

Let's back up first.

I have written in the past about my grandfather Dallas Spencer. My grandfather was born on his family's farm outside Lansing, Ingham, Michigan. It was the same farm his great-grandparents first settled on in 1867.

After his education at the Agricultural College of Michigan (now Michigan State University), he served in the Navy in World War II, both in the US and in Japan. Eventually, he took an engineering position at the Department of Energy's new Argonne Laboratory in suburban Chicago. Argonne was founded in 1946 by several of the participants in the first successful nuclear chain reaction under the Stagg Football Field at the University of Chicago. Here is some great history about Argonne.

While my grandfather was not 'under the field' for that moment in scientific history, he was later presented with a small token to commemorate it:

Readers of my blog may remember that I have sons who run competitively. My college son was racing in a meet... at the University of Chicago. And it happened to be a glorious, 50 degree February day in Chicago. So I went with dual purposes: watch my son and his team compete, and visit the University.

My grandfather went from a boy on a farm to a seaman in Japan to an engineer for the Department of Energy. He circled the world. In following my sons as they circle their prized track oval, I can make connections and create context to the places I visit and the things I have learned about my ancestors. Watching my son reach for his goals gave me an opportunity to remember my grandfather and how his choices reflect why I am here today.

The Circle of Life.