While taking breaks from my DNA matching, I am doing my best to shore up some of my family lines that are a little neglected. One is my maternal grandfather's COUNTRYMAN line.

My earliest known ancestors were Peter Countryman (read about his probate here) and his wife, Matilda AMES. Peter and Matilda had seven known children, and possibly eight, when they both died in their 40's from causes I have yet to discover. The family were early settlers of Ingham County, Michigan, around 1834.

I have a lot of speculative information about Peter's ancestry from the help of many excellent Countryman researchers, but Matilda and her Ames family had continued to be a mystery. One of my distant cousins hoped we could find a connection to the famous Ames brothers, Oakes and Oliver, who were instrumental in the expansion of the transcontinental railroad - and the scandals that followed. Alas, we are not.

I would check Google and Google Books every once in a while to see if any clues popped up. Earlier this year, this did:


Ingham County, Michigan! This was a real lead! But darn that snippet view. No matter what combination of names I searched for, I could not get farther. No way was I going to attempt to guess who her parents and family might be. I then used WorldCat to locate the book as no print copies appeared to be available for purchase. WorldCat showed six copies in the United States. The closest was at the State of Wisconsin Historical Society in Madison.

I have been though Madison but never stopped, so I decided this would be a me-cation or day-cation or genea-cation, or, you know, one day alone! Madison is just over a two hour drive from my house. In addition to the Society library, my destinations included the University of Wisconsin campus and the shores of Lake Mendota.


The building is a library, archives and research center. The Society has occupied the building since 1900. The staff was very helpful in directing me to my book's location on the 6th floor. The building had those wonderful old book smells and creaky door sounds.

Here is the book: 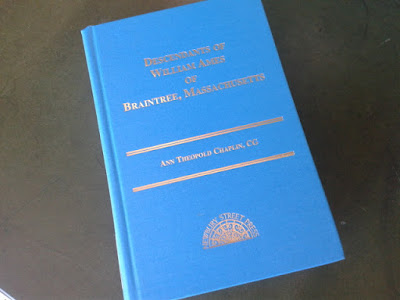 It is very possible that this book has never even been touched before. I pulled it out of the stack and it looks like it came fresh from the printer. It was a traditional descendancy, so I first located Matilda's family, then went forward and backward noting my particular lines. I took the book to the public scanner, and after a few minutes of scanning, printing and $2.87, I had my information. (Yes, I copied the source citations and cover matter, 'natch).

I drove around the UW campus, picked up some lunch, and sat along Lake Mendota and enjoyed the beautiful day.


Then it was back to Illinois, home of corn and soybeans...and wind. 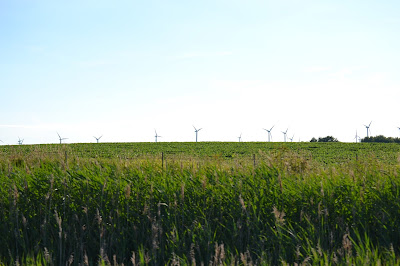 I haven't yet entered my new information into my family tree program yet. I have read through it a couple of times. And a huge shout out to Ms. Chaplin for the book - your efforts have not been in vain.

I am savoring the moment - both of my new-found ancestors and my day away.