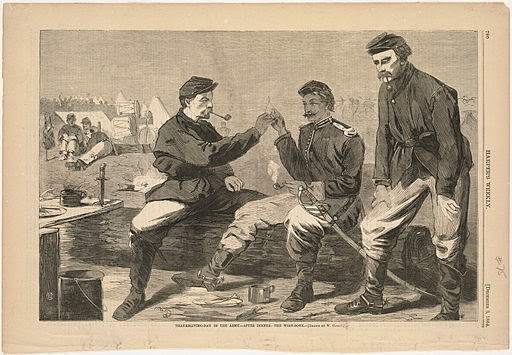 Email ThisBlogThis!Share to TwitterShare to FacebookShare to Pinterest
Labels: customs

A Piece of My DNA Puzzle 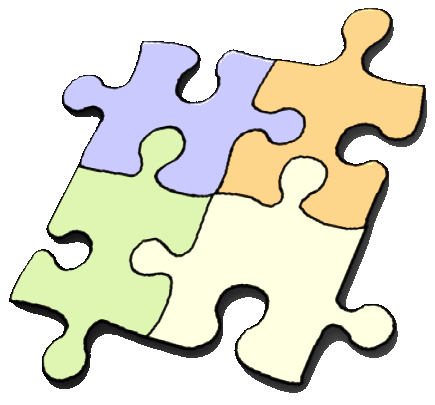 DNA testing has been front and center for me over the past 48 hours.

First, the good news: I finally have a close connection on 23andMe! I tested almost a year ago. I explore the site every month or so, and haven't had much luck in pursuing any particular ancestral line. Last week, a connection considered by 23andMe to be a 2nd-to-3rd cousin appeared. We agreed to connect, and lo and behold, we are indeed second cousins! I didn't know her specifically, but I am familiar with her family line. Welcome to my branch of the family, Linda!

Our fathers are first cousins. Mine was the first grandchild in this line and her father was the second. After speaking with my dad, I enjoyed sharing with Linda that as children, our fathers used to be called "Jackie Joe" and "Jimmy Joe" by the family. They are also happy to have long outgrown those nicknames!

As I wrote in my prior DNA post, I was admittedly uncertain how the whole genetic DNA connections worked. I knew that I only received a way-back-in-time haplogroup assignment for my maternal side.

I erroneously thought that I only received maternal results. My connection this weekend with Linda disproved all that - to my great relief! Linda and I are paternal cousins. We were both thrilled to learn this was not strictly a maternal-side match. After that realization sunk in, I went to all my potential connections in the list that were expected to be 3rd-to-6th cousins and wrote them all back. Hopefully, I can find more cousins. Sometimes it just takes that one breakthrough to produce a bigger "aha" moment.

But the less-good-news for 23andMe was that it was called on the FDA carpet for not answering inquiries into its marketing of health claims [Wall Street Journal article]. Hopefully, this will be a non-event shortly. I can understand the need for some standards, especially in an infant industry ready to break out into the mainstream. I also could not imagine an internet spit test being the only tool someone would rely on for genetic testing.

The only way I will get any leads on my difficult Irish ancestors will be through my brother and father taking DNA tests. The only (read: financially reasonable) way I can test them is through a 23andMe test - whose sale is now tentatively halted.

Hurry up and resolve this because I have family to find!

What's In A Name?

What's in a name?

Shakespeare's famous quote tells us that names can be many things. For those of us genealogy types, a name is pretty much everything. It is the link by which we discover and track our family, generation after generation. But sometimes, those names aren't so rose-like and sweet.

One of my usual databases to keep tabs on is Google Books. I enter many of my "main names" and brick walls every once in a while to see if there are more appearances in the digitized books. I use all the usual search tricks: last name only, within quotes, with a location or collateral name. Most of the time, I see the usual suspects. And that's the problem: it's the usual suspects.

Part of the reason I have difficulty, and then frustration, finding names is simply the names themselves. I haven't blogged very frequently about my pre-Revolution families, mostly because I haven't had the time and means to search in depth. I can find them on censuses and plat maps and sometimes old county histories. But darn, if their names don't hang me up! Here are some of them:

My big brick wall is Asa Spencer. So far so good. He'd be easy enough to find, if he weren't an alien, dropped into 1810's Vermont.

There is another Vermont Wright Spencer - not mine - who had a son Demon Spencer. What would possess one to use that name? Never mind.

My Wright Spencer had a son called Washington Spencer. Imagine all the results having "Washington" in a search. The head spins. He was actually Washington Irving Spencer, like the author. Sigh.

Wright Spencer's grandson, my great-grandfather Edward, married into the Frederick family. Try searching for William Frederick and his father Richard Frederick. The databases love to give me "Frederick Williams" and "Frederick Richards."

I have a William Thomas with a son George. You can do the flipping.

Then there's Jacob Countryman. Who knew how popular "countryman" is as an adjective? Me!

I won't even start with the 12 - yes, 12! - tree members called Thomas Allen. Every family for three generations in my tree had a Thomas Allen.

I'm sure you named children after a wife's family or a revered ancestor or a geographic location. But didn't you know that 200 years later I wouldn't be able to find you!

I'm just thankful for not having many Smiths.

Have any fun/frustrating names? Or good search tips? Or a connection? Let me know!

Every November we make an annual trek from suburban Chicago to the mecca of Illinois high school running: the state cross country meet in Peoria. We take the same route every year. It is a little off the major highways, but a somewhat direct route, as Peoria is bounded by the Illinois River and there are few places to cross.

On our trip I have noticed a small pioneer-like cemetery as we head into the town of Lacon. And before we approach that one, I kept noticing what appeared (hoped!) to be a tiny cemetery in the middle of a farm field. The space had the tell-tale rectangular shape with several old trees inside the wrought iron border. Yesterday we stopped. I wasn't passing this one without investigating for yet another year! 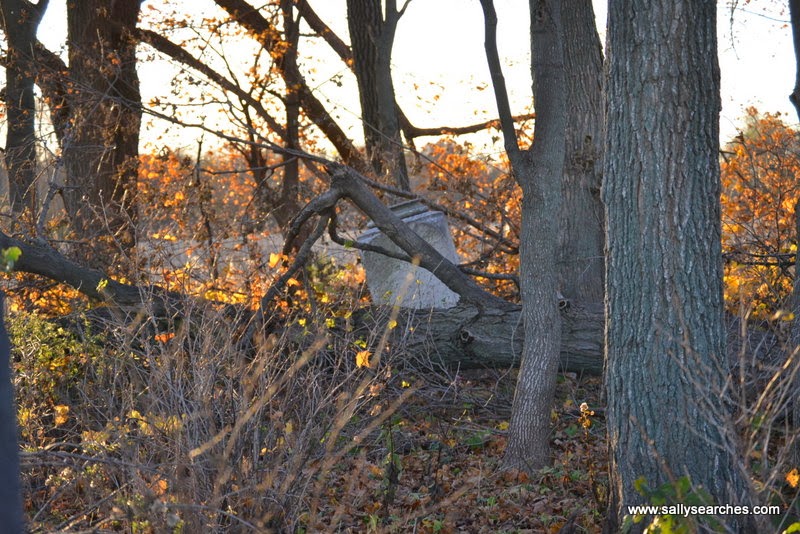 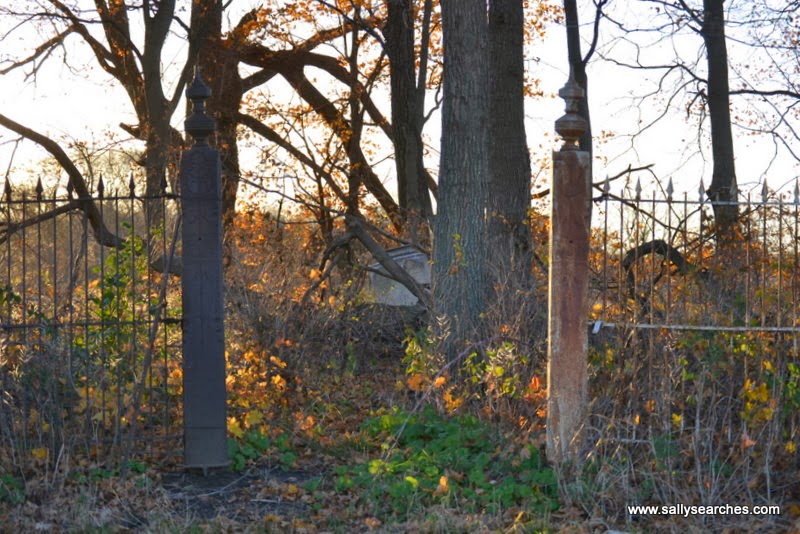 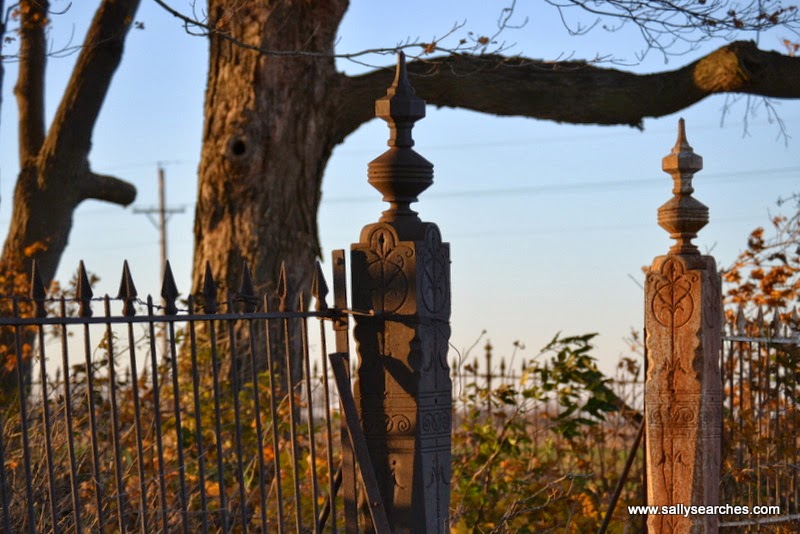 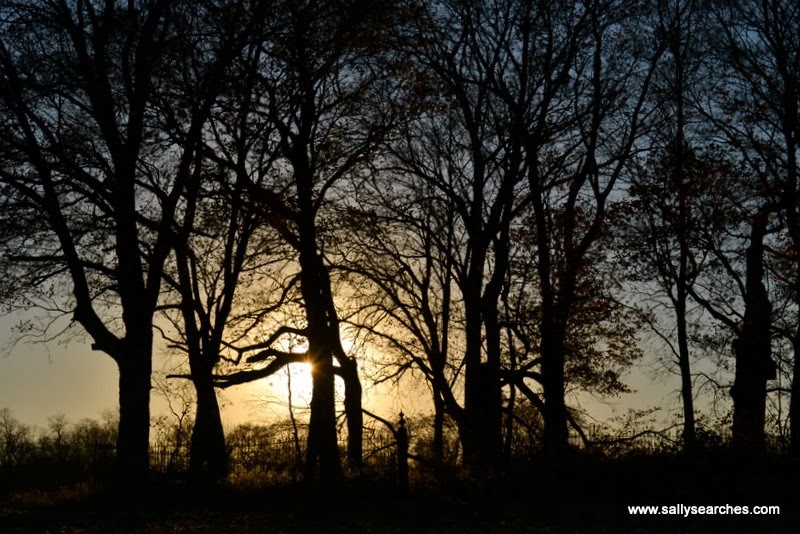 Apparently, there are eight known burials. I didn't enter the gates, and only saw one remaining stone: that of Lemuel (1806-1892) and Sarah Russell (1809-1890). It is sad to see it so overgrown, but I'm glad it remains and that I finally investigated it, at least by camera.

My grandfather, Dallas Spencer, was a Naval Reserve officer. He was educated at Michigan State University, then Michigan State College of Agriculture, where he received his engineering degree. Initially, he worked in the bridge division of the Michigan State Highway Department.

He was a Lieutenant Commander in the 116th Naval Construction Battalion Civil Engineer Corps, working as a "seabee" during World War II. He served in Sasebo, Japan and Gulfport, Mississippi during the war. In 1946, he received his honorary discharge and returned to civilian life. 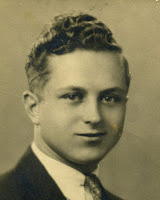 To date, my only known Civil War ancestor was Louis Blanchette a/k/a Blanchard, of Chippewa Falls, Wisconsin. Louis, a native of Baie-du-Febvre, Quebec, Canada, settled in Wisconsin in the 1860's. He was a sawyer, or lumberman, by trade. During the Civil War, he was a Private and served in Company H, 4th Regiment of the Wisconsin Volunteer Cavalry from 1863-64. Company H was organized in Racine, Wisconsin.

Louis' company was dispatched by ship to Louisiana, where they drove lumber down the Mississippi River, and also saw action in regional skirmishes. Undoubtedly, Louis' French-speaking background came in handy. He filed for a pension at least 3 times, stating he received a debilitating hernia after a horse fell on him. He received a small pension and his children received a $50 death benefit payment in 1923.

In honor of all veterans, on this Veterans Day, 2013

Disciple of the Pill Bags

While researching information for the subject of a recent Tombstone Tuesday post, I came across this little nugget of humor:

Dr. A. F. Hand was our next disciple of the pill bags.


That's a curious description of a doctor, especially one of the first in town!  It came from the 1882 History of Grundy County, Illinois, available for free at Google Books.

As some of you know, if you are regular blog readers, my sons run. A lot. As supportive parents, we follow their running exploits all over the state of Illinois. This past weekend was no exception: we took the long four-plus hour trip from suburban Chicago to suburban St. Louis. I checked the highway and satellite maps to learn the area we were visiting, to locate both the hotel and the campus of Southern Illinois University at Edwardsville, where the cross country races were being held. In the back of my mind, I knew that the ancient Cahokia Mounds were also nearby. In fact, they weren't more than 15 minutes from our hotel.

I have an archaeological / anthropological / historical Bucket List in my head. Stonehenge is Number One. But Cahokia Mounds? They definitely make the cut!

Cahokia was the most sophisticated native settlement north of Mexico, lasting from about 700AD - 1400AD. At its height at about 1000AD, up to 20,000 people may have lived here. Cahokia Mounds are what remains of this Mississipian civilization. Many of the mounds, in all different sizes, have been excavated, studied, and cataloged over the years. Today, visitors are able to make a climb to the top of the main feature, Monk's Mound, by modern staircase. Monk's Mound is over 100' tall. From the top, you can see for miles across the Mississippi River and to St. Louis.

After the decline of the Cahokia civilization, the area was home to early French explorers and Trappist Monks. Today, Cahokia is enveloped into the town of Collinsville, though the main features are preserved. There is a world-class interpretive center filled with artifacts, dioramas, photographs, and information about the peoples and the site. There are exceptional maps, and it is free to visit. The Mounds are both an Illinois State Historic Site and a UNESCO World Heritage Site. If you find yourself in the St. Louis area, take part of a day to visit Cahokia Mounds. For now, here is the link to their terrific website and my photos of our visit. Enjoy!