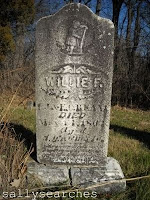 When I took this photo in November, 2010, I was intrigued by the carved symbol. The gravestone belongs to Willie Beane, young son of Frederick and Elizabeth (Walley) Beane. He was about one and a half years old when he died. He and his family are buried in a secluded rural cemetery.
There are often engravings on gravestones, especially for children. This one shows a sad child playing a tiny harp. The harp often means "praise".
Rest in peace, Willie.
Posted by SallySearches at 7:14 PM

I am so bad at blogging! I had such good intentions when I started this...almost two years ago. So now I am editing it and going to do my best to stay on top of it. I thought this would be a great way to document my searches and frustrations...and it is. Except my frustrations are currently not having any time to actually search and blog about it!

I have two extremely busy boys who are in three sports between them. In fact, I woke up this morning after a restless sleep, dreaming about scheduling and carpooling and time management. Yikes.

I so want to get back to this project. Wish me luck!
Posted by SallySearches at 9:17 AM

Email ThisBlogThis!Share to TwitterShare to FacebookShare to Pinterest
Labels: Sally

The internet has exploded with social media lately. I have always tried to keep a sense of anonymity on the internet. I joined Facebook and have found it to be a great way to keep in touch with old friends and neighbors. Last year, I plugged in the names of some probable descendants of the Spencer family...and in less then a day, all three wrote me back! So we connected but haven't gotten much farther.

I also use Twitter. I am addicted. I tried to keep separate accounts for genealogy and every day life. It really became too difficult to maintain, but I have yet to "pull the plug" on the genealogy account. I have Twitter on my BlackBerry and usually check my tweets that way. Those who are familiar with me get genealogy, sports, world opinion, and motherhood tweets. You can follow me at SallyOnTheGo.
Posted by SallySearches at 8:47 PM

Early on in my genealogy travails was the overwhelming desire to learn about my Spencer family line. Spencer was my grandfather's name. My mother, and now I, have a few neat keepsakes from the old farming days: a nifty leather wallet, a recipe for an herbal cure, several receipts for farming implements, and a note with Wright Spencer's life dates. Who was Wright Spencer? I remember my great-grandfather Edward Spencer - he died when I was a teenager. But I had never heard of Wright. At the time, I didn't even know that I wanted to know about him.

I knew that my mother moved to Illinois from Michigan as a child, and that my grandparents were born in Michigan. That's it. It was time to visit a library and learn how to order LDS microfilms and whatever else I could find. The Jackson Accelerated Index census books became my friends as I scrolled through the fairly common "Spencer" in search of a not-so-common "Wright". He had to be a relation, or this slip of paper would unlikely be kept in the wallet.

I did find Wright Spencer living in Ingham County, Michigan in 1880. Was this my family? As I worked more and asked questions of my grandfather, I was indeed correct. My first real line! I really had no idea what I was doing and how tiny my genealogy realm was at the time, but I was hooked.

Posted by SallySearches at 8:47 PM

Like so many others, I have become fascinated by my family history. I was always a good student and enjoyed school, but history and sociology were never my things. Maybe it was sneaking peeks at some of the small family heirlooms we had, or realizing that my great-grandparents, who I spent much time with as a child, had to come from somewhere that finally got me going.

I began taking handwritten notes in my teens, then learned about the resources available at both the public and LDS libraries. I learned to write actual letters requesting data. Then came the internet! Computers have always been a part of my professional life, so being a good *user* was no problem. I am glad I started as early as I did, so that I can work on as much as possible while keeping tabs on the technology that goes with it.

I hope to post some of my findings and stories. I also have lots to rave and complain about from my real life! Thanks!
Posted by SallySearches at 8:45 PM