Anatomy of a Runaway 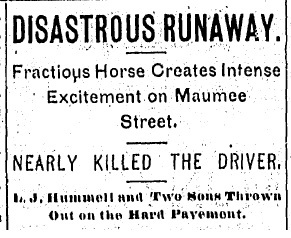 The extremely spirited horse of Lawrence J. Hummel, who lives on North street, opposite St. Joseph’s academy, became frightened at escaping steam from the boiler of the plating works in Conger block, last evening, about eight o’clock, and succeeding in stringing the occupants of the carriage all along Maumee street and almost killing the driver.

Mr. Hummel was driving south on Broad street, the horse hitched to a two seated buggy, the rear seat of which had been removed. He had in the buggy with him his two younger sons, Otto and Arthur. When the horse started he turned the corner west on Maumee street, and Mr. Hummel immediately lost control. Just in front of the Star laundry Mr. Hummel was pitched out head first, and struck with terrible force on the cobble stone pavement. The younger son, Arthur, aged 12, rolled out the back end of the carriage, but Otto, aged 14, was served similar to his father and struck on his head on the pavement, just in front of the Spalding homestead. The horse continued on its way at break neck speed, and attempted to make the turn south on Main street. He was going at such speed, however, that he slipped and fell, sliding on the sidewalk and stricking [sic] with such terrible force against the Hart & Shaw corner, within a few inches of the big plate glass window on the Main street side of that store. The buggy was overturned in a bad mess, and the animal cut and bruised terribly. He attempted to rise and start again, but was soon in the hands of men who could handle him.

Mr. Hummel, who is a man 54 years of age, was dangerously injured. There were several bad cuts on his scalp and very serious concussion of the brain. He was taken into the laundry office, where another of his sons is employed, and from there conveyed to the office of Dr. Williams, close by. The doctor was out, but Dr. W. E. Jewett and Dr. N. R. Morden were soon there, and rendered the necessary help, Mr. Hummel was conveyed home by Dr. Morden, in the doctor’s carriage, and remained unconscious until 3 o’clock in the morning. After that he revived, and is resting easy at this writing, although the concussion is dangerous, He bled profusely, and the office of Dr. Williams looked as if a horrible murder had been committed there.

The boys were picked up and taken into the office of Mr. Maples’ hotel. Senator Rorick picked up Otto, the one more seriously injured, and carried him in his arms as tenderly as a mother. Dr. Williams and Dr. W. E. Jewett, jr., were found and took charge of the two boys.

It was found that Otto had a gash six inches long on the back of the head, which stripped the scalp to the bone. Some of the scalp had been ground into pieces and destroyed so that it had to be cut away. There was also a slight depression of the skull, and altogether the boy’s case looks as serious as that of his father. He was taken to his home in Conklin’s ambulance, and is resting easy to-day.

The younger boy was suffering more from the shock than the actual injuries, but he was considerably bruised up.

This is the third time their horse has run away and injured the occupants of the buggy. He once took a run on West Maumee street, throwing out one other member of the family, and quite seriously injuring him. He also took a turn on Frank street a short time ago, and made a bad mess of the wagon.

The excitement last evening was intense. A crowd gathered about Dr. Williams’ office, and the office of the hotel would number 500 or more.

There are so many things to analyze and discuss in this article, which will be the topics of future posts. For now, take away the knowledge that Lawrence J. Hummel was my great-great-great-grandfather.