Situated on the bank of the Illinois River in the small town of Marseilles, Illinois, is the Middle East Conflicts Wall Memorial. This memorial bears the names of those brave men and women who gave their lives in various Middle Eastern conflicts since 1979. It is a permanent, open memorial, and certainly worth the visit if you are in northern Illinois. 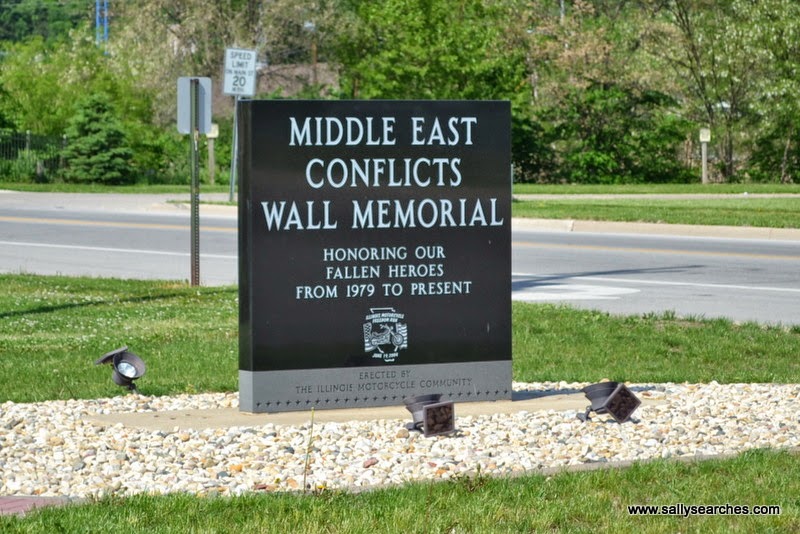 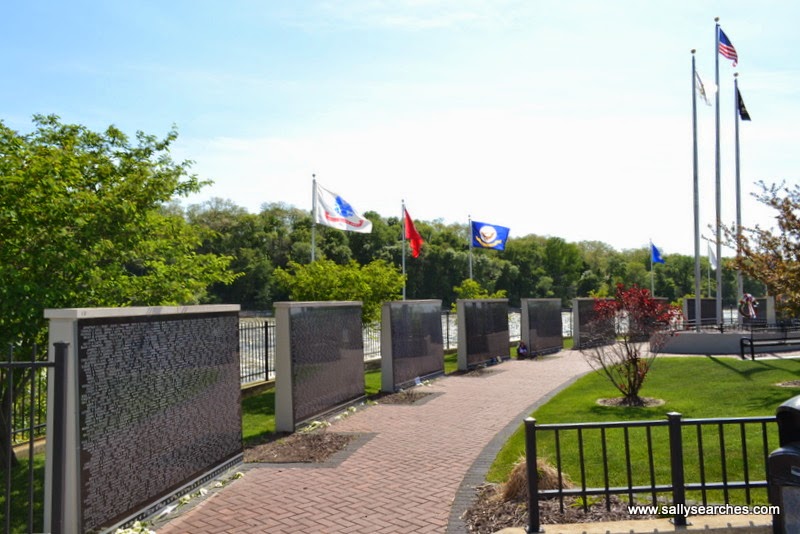 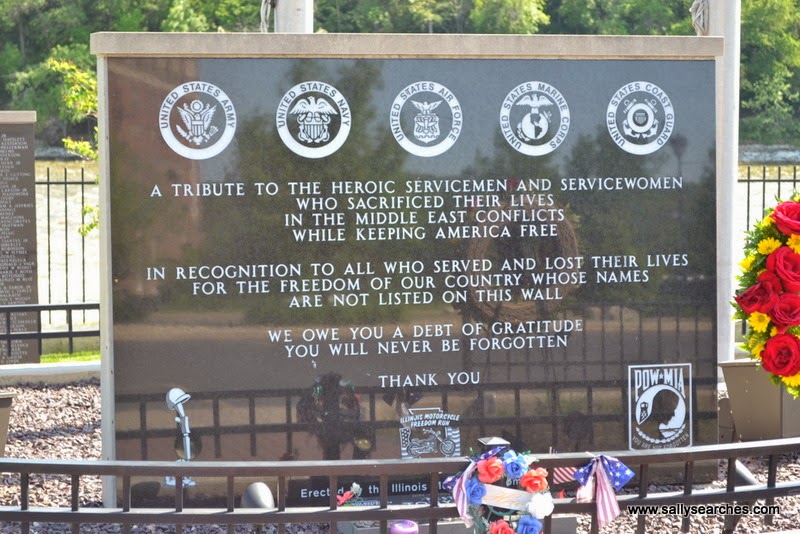 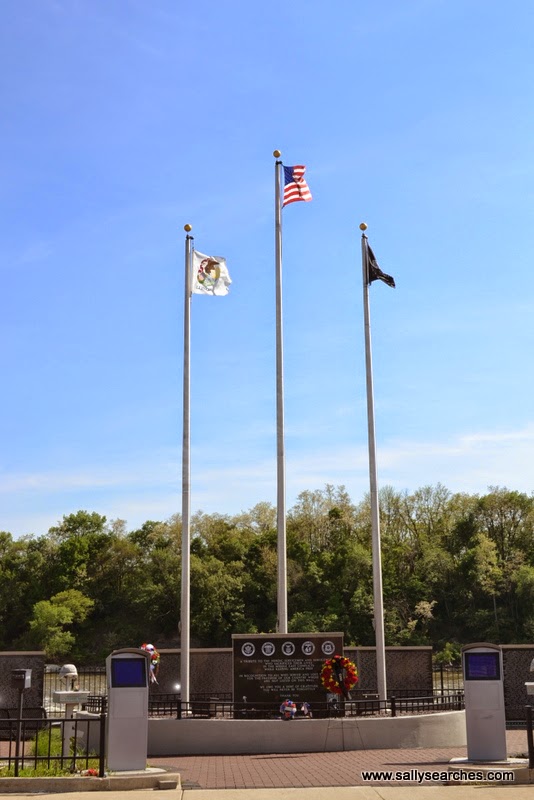 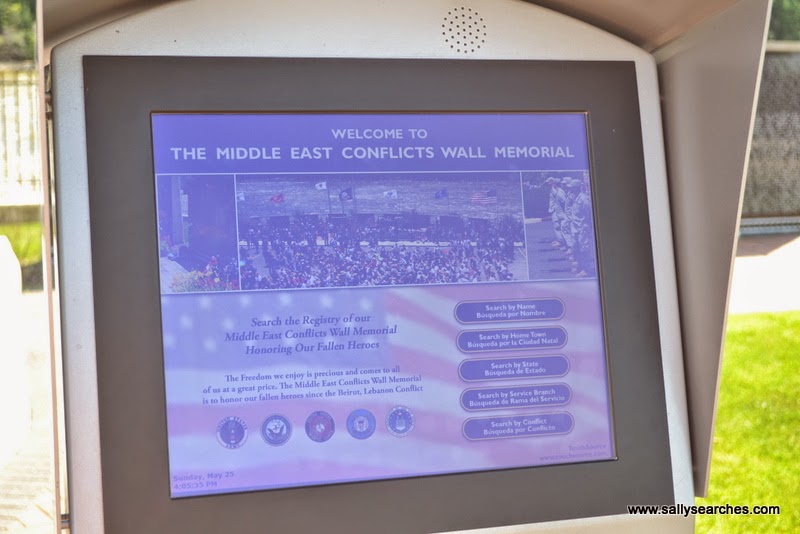 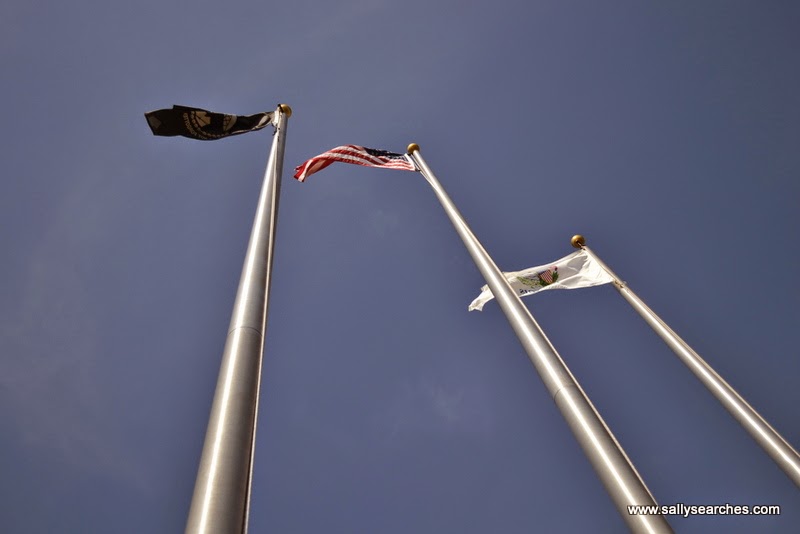 This week's post is a photo tribute to my great-grandfather William Lawrence HUMMEL (1896-1981), known as Grampa Bill to me. 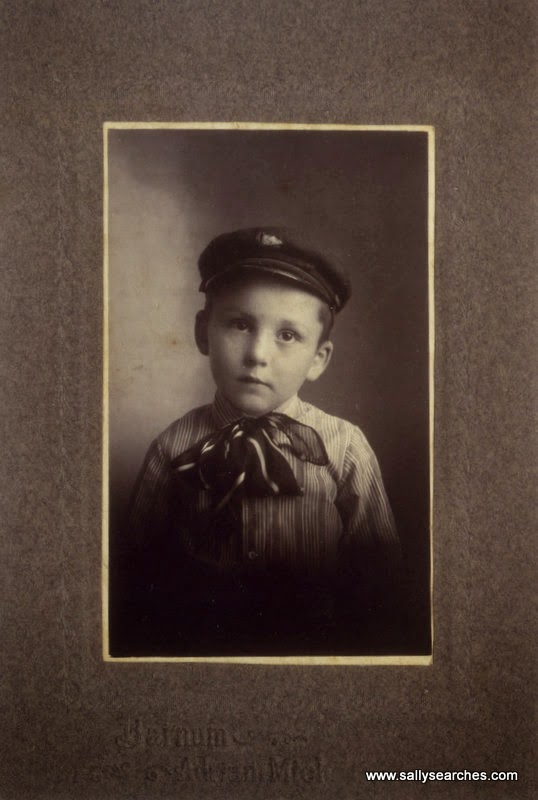 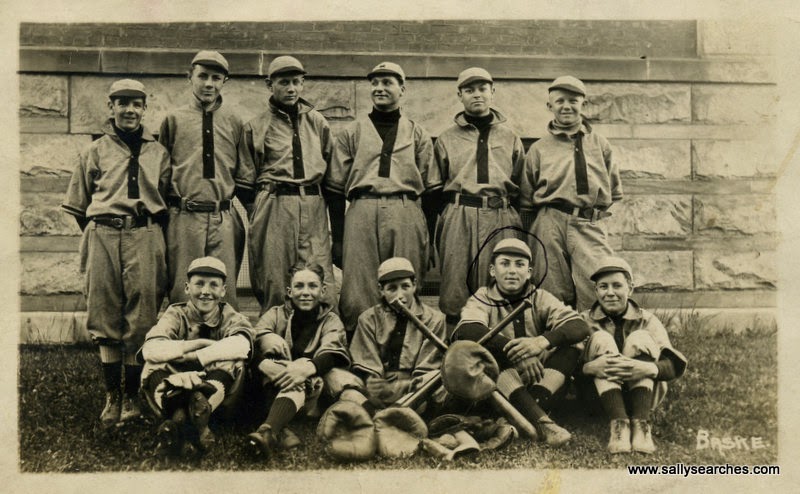 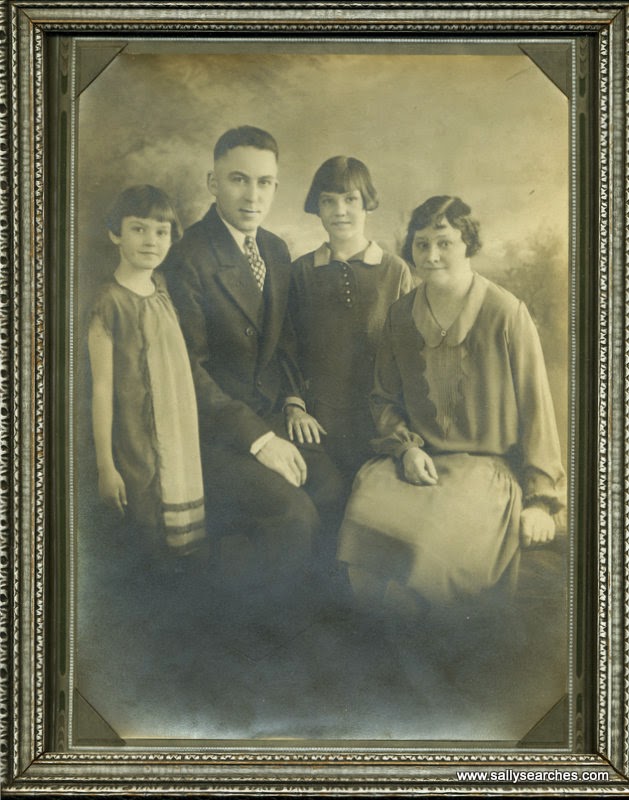 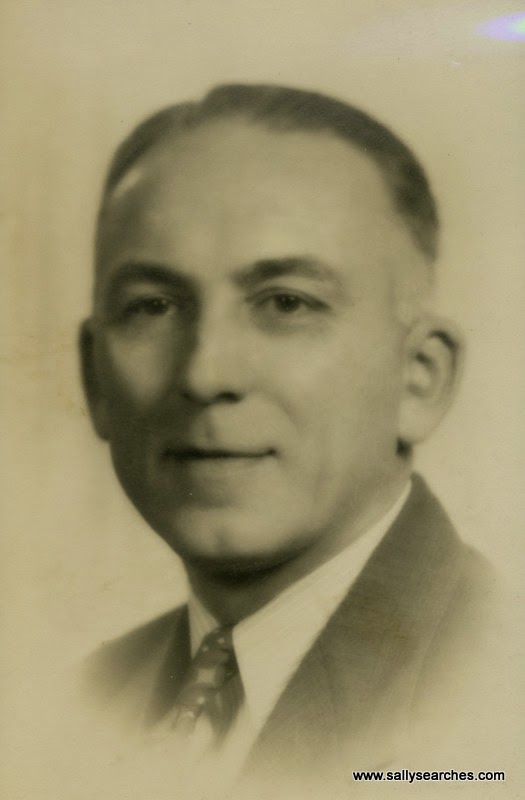 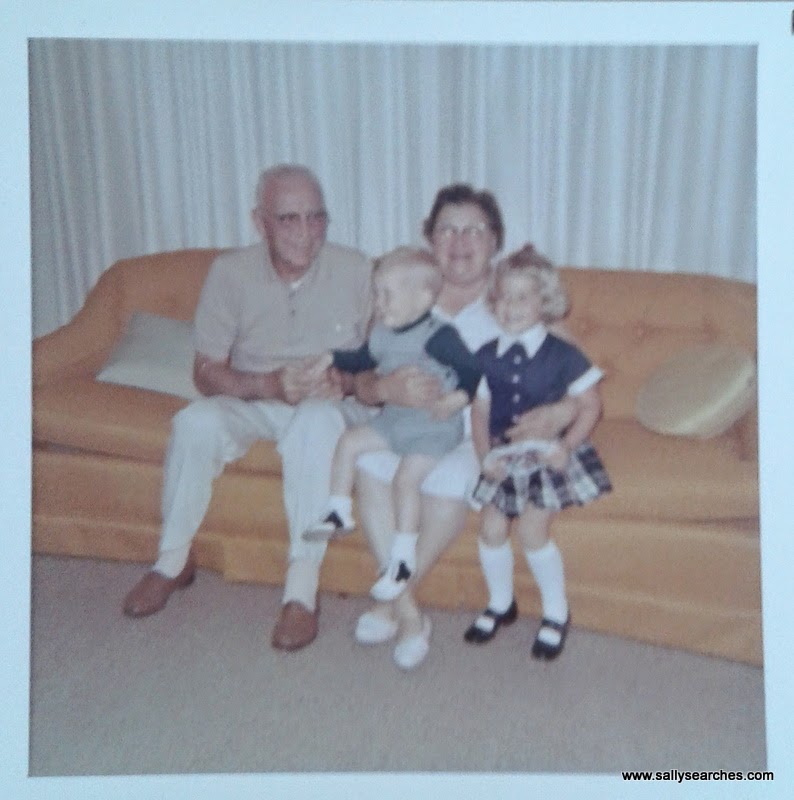 William's page in my database

This week's biography is of a maternal great-great-grandfather, Lorenz Simon HUMMEL. He was the fifth child born and first son to reach adulthood of Johann Lorenz HUMMEL and Christina Carolina EBINGER. They were, you may recall, recent German immigrants to Michigan.

Lorenz Simon, known as Lawrence in America, was born 21 February 1876 in Adrian, Lenawee, Michigan. He was baptized in the Lutheran tradition at St. John's Church in Adrian. I am fortunate to have his original baptismal certificate...in German. 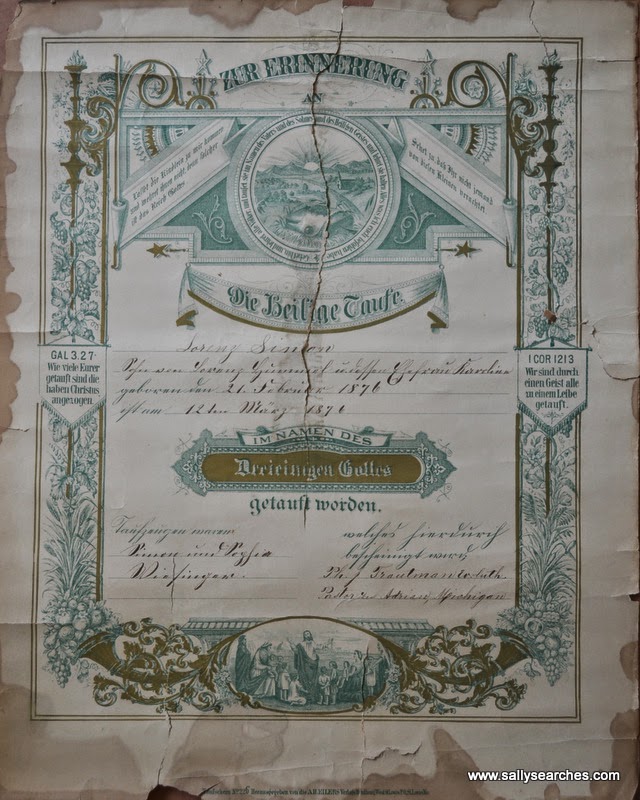 His father practiced the craft of furniture making, but Lawrence went off on his own, as many 'new' Americans were wont to do. He teamed up with another local gentleman, William McDONALD, and in the late 1890's together they owned and operated the Star Laundry, the 'oldest and best in the city.' 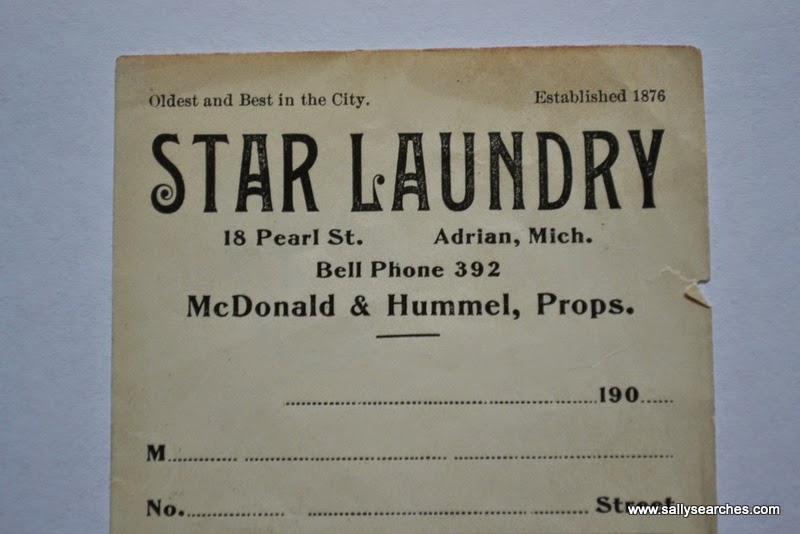 Together they had two children, William Lawrence in 1896 and Alma Carolina in 1903. But things did not remain rosy for long. In 1909, Annie formally filed for a divorce. She charged Lawrence with 'extreme cruelty.' But interestingly, the terms of the divorce did not go in her favor. At all. They had recently purchased a new home in Lansing, Ingham, Michigan and the divorce decree stated Annie was to quit claim any right to that home forever as well as to the furnishings and personal property acquired during their marriage. Additionally, and amazingly, Lawrence also received full custody of the children and Annie was granted visitation of not more than once every two weeks. As an alimony, she received a lump sum of $50.

They signed the settlement on 17 June 1909, in Hillsdale County, which is not where they lived. And then, by December 1909, Annie had already remarried...in Hillsdale County. It would appear that Annie left the marriage for what she hoped were greener pastures. She was certainly persona non grata among the Hummel's forever after.

Lawrence later remarried a local German widow, Helena KOPKAU EVERT, who also happened to be the aunt of his son Willam's new wife. They were married in Lansing on 21 June 1917, and they remained there the rest of their lives. 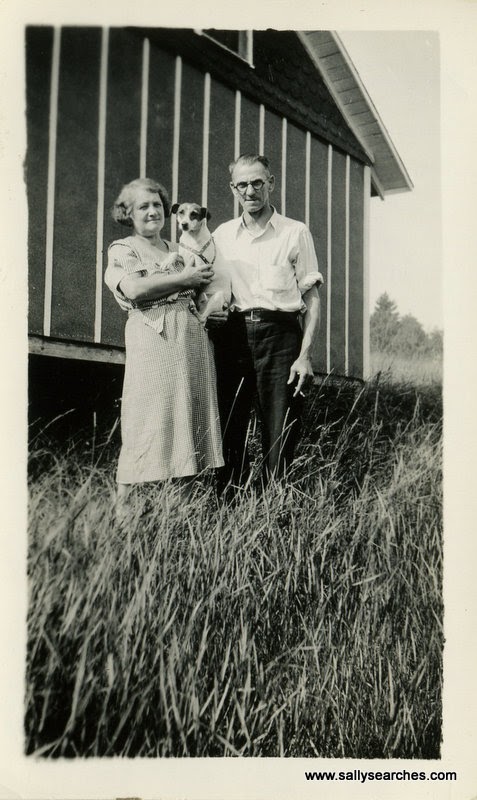 Lawrence was born fully immersed in the German culture, but after owning a business, suffering through a divorce and eventually finding contentment, he lived a truly American life.

Lawrence died on 9 November 1934 and is buried in Mount Hope Cemetery in Lansing.

Lawrence's page in my database

Johann Lorenz HUMMEL was previously introduced in my blog as both my great-great-great-grandfather and the unfortunate victim of a runaway horse and buggy. Let's start from the beginning and learn a little more information about "Lawrence" HUMMEL.

Johann Lorenz HUMMEL was born 16 May 1843 in a small village called Buenzwangen near present-day Stuttgart, Germany. He was the ninth of eleven known children born to David HUMMEL and Rosina Dorothea BUCHELE. Much research was performed on the families of this region, including the Hummel's, through the thousands of record transcriptions found in this database. I contributed my known family records to the database as well. [Kudos to Kathy for her hard work!]

Lawrence, as he is known in American records, emigrated to the United States via the ship Vera Cruz and landed in New York on 28 September 1866. He was accompanied by his youngest sister, Barbara Catharina HUMMEL. In 1869, Lawrence married fellow German immigrant Christina Carolina "Carrie" EBINGER in Coldwater, Branch, Michigan. Lawrence's sister Barbara married Frederick Carl EBINGER, the brother of his wife, in 1870. They lived in Hubbard, Trumbull, Ohio. Additionally, at least two sons of their sister Margarethe HUMMEL HOEFER, also emigrated and lived in northern Ohio.

Lawrence was naturalized in January 1877 in the circuit court of Lenawee County, Michigan. He was clearly planning on staying! And it always makes me happy to see that my ancestors can sign their names. Big X's make me sad. 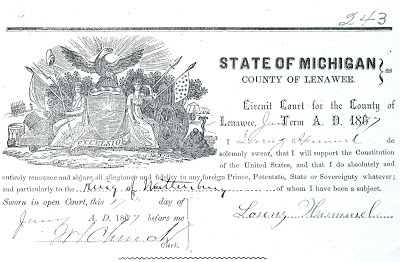 Happy Mother's Day to my mother, grandmother (at age 95!), and all of our ancestral mothers before us. 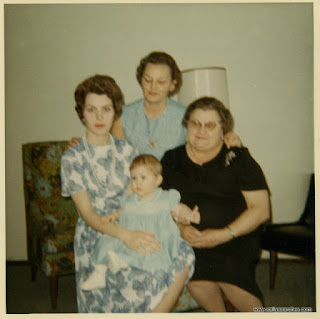 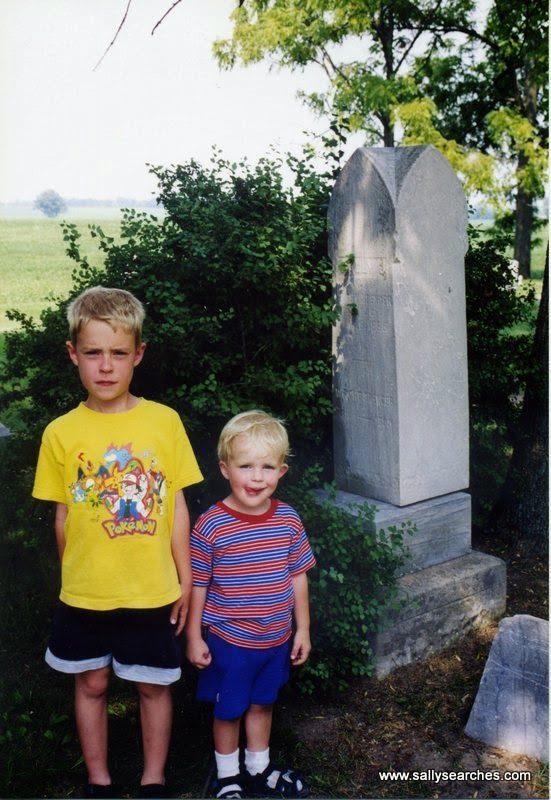 How is that for a multigenerational photo? That's nearly a 200 year span.

Back then, the tradeoff was they visit the cemetery with mom in exchange for running around collecting sticks and pinecones and rocks. And I get this once-in-a-lifetime memory. Works for me!

Posted by SallySearches at 7:09 PM

This week's post is a little difficult to write, because I have several pieces of information about the subject, but none are clear details on who he really is or where he came from.

Richard FREDERICK is the father, grandfather, and great-grandfather of the previous three subjects in my FREDERICK family. At least on paper.

I can easily document my FREDERICK descendant lines. Last week, in his son William's biography, I mentioned that I knew William's father was Richard. William's 1893 death entry in the Ingham County, Michigan records states that he was born in New York in 1818 and that his parents are 'Richard FREDERICK' and 'Mary FREDERICK.' I do not know who supplied the information but it was probably Nancy, his widow. Hopefully she knew enough about William's family to answer with some accuracy.

I wrote previously about the difficulty in finding very common names in databases. FREDERICK definitely fits that bill. At least William gave unique names to some of his children: Delos, Fremont and Josephine.

Before moving to Ingham County, William lived in Shiawassee County from at least 1847. Using the US Federal census records, my next likely task is checking for a Richard in those or surrounding counties. If William was born in New York, as were many Michiganders of this time period, perhaps he came with his parents. Based on William's age, Richard would need to be born before 1800. William gave New Jersey and New York as the birthplaces of his parents on the 1880 census.

There are no likely matches for Richard in 1880.

In 1870, a census entry in the city of Pontiac, Oakland County, just east of Shiawassee County, is a very possible candidate:

Close! But too many problems: Richard must be older to be mine, BUT he is a retired shoemaker, the same occupation my William practiced for many years. William B., a likely son of this Richard's, lives next door.

In 1860 and 1850, there are matching entries for the same Richard and Ann in Oakland County. Unfortunately, they still haven't aged enough to be my William's father and (step)mother.

Searching for Mary FREDERICK in 1850, though, yields a real possibility. In the household of Sylvester and Almira ANDERSON of Pontiac, is a Mary FREDERICK, born about 1787 in New York. And, according to the same early list of Oakland County marriages where I found my William's, Almira's maiden name was FREDERICK. Oooh, a real clue!

While none of these families is correct, I think they are similar enough to warrant further research. The names (Richard, William, and Josephine [a daughter of the Anderson's]) are repeated in the families. Both my William and this new Richard were shoemakers. And Mary was the correct age to be a possible mother of my William.

Do you think I'm on the right track?

Richard's page in my database