While recently visiting a new-to-me cemetery in Grundy County, Illinois, I photographed some rather large gravestones. In this case, I think monument is more the proper term. These two huge monuments, I came to learn, belong to the same man. The data is the same on each, but they are in completely different sections of this rural, primarily Irish Catholic cemetery. The first: 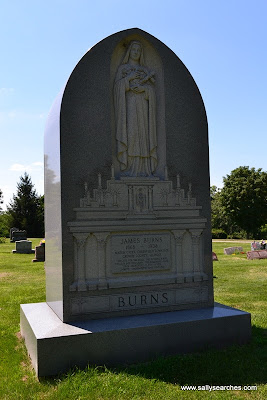 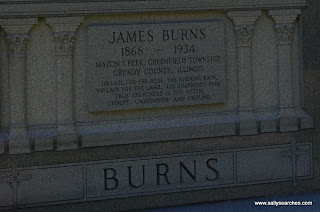 Then in the front of the cemetery, slightly more traditional but equally as imposing, is this monument: 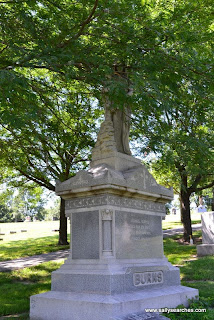 Now I know nothing of Mr. Burns or his family (Ellen is his sister). By chance I happened to photograph both of these monuments during my wanderings. Even more interesting is the story I found on his FindAGrave page: that Mr. Burns decided to spend all of his wealth on gravestones so that nothing would be passed on to his family. He may also have more monuments in more cemeteries and no one knows where he truly lies, if the legend is true.

It was a pleasure meeting you, Mr. Burns, wherever you are.

Today is my grandmother's 95th birthday. We are so thankful she is still in our lives! Born at the end of World War I in Lansing, Michigan, she has seen so much in her long life.


Thanks for the great memories as a kid, having dinner with you and grandpa.

Thanks for being the fisherwoman and cook, even though you didn't like fish.

Thank you for sharing your memories of your youth and German immigrant neighborhood.

Thanks for identifying all of your cousins in the family picnic photo.

One of the most interesting burials near me is that of Chief Shabbona. He was a Potawatomi chief, although born into the Ottawa tribe about 1775. He was an ally of Tecumseh during the War of 1812. His place in history is that of peacemaker, warning other tribes of the impending unrest and war in Illinois brought by Sauk warrior Black Hawk, eventually becoming the Black Hawk War of 1836.

Shabbona died and is buried in Morris, Grundy, Illinois, along with his wife and many other family members. Every time I have visited, his grave is filled with antlers, rocks, native flowers, and American flags. 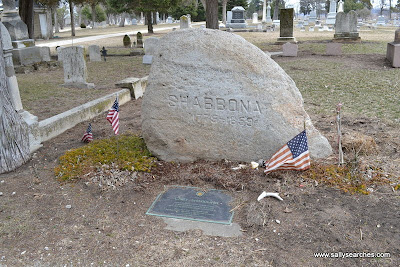 Children of the Corn

As a child of Illinois, when it is summer you know that corn is everywhere. I mean everywhere. It's grown on a farm at the end of my street, and I drive past acres and acres during the day. The best part is being able to stop at a farm stand, farmer's pickup truck, or an on-your-honor cart to buy fresh-picked sweetcorn. Illinois is one of the corn-growing capitals of the Midwest. Illinois rivals Iowa in corn production, and it produces between 15-20% of US-grown corn. 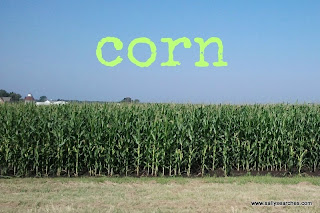 Most of my ancestors before 1900 were farmers. Many traveled from New England and Canada into the Midwest. Like many families, they didn't stay in one place for too many generations. But if your family did, and the farm continued to be passed on from one generation to the next, there are resources to help you search for long time family farms: centennial farm registries. 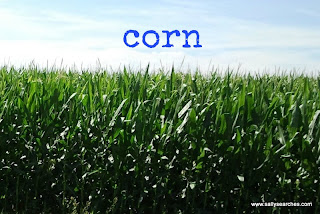 Many state agricultural departments have created a way to recognize the family farm. Owners can submit various types of proof (and perhaps a fee) and then have the farm verified as a Centennial Farm. In Illinois, there is also a Sesquicentennial Farm registry. 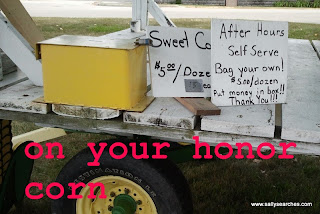 Here are some Midwestern state links for further research: 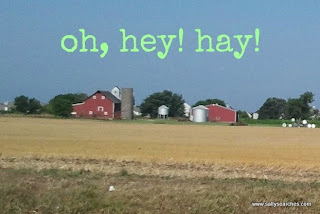 We are a family of runners. I was a medal-winning high school runner. My husband was a state cross country champion "back in the day" and even ran professionally. Both of my sons are state-qualifying cross country and track runners. Trust me, we have the t-shirt and hoodie collection to prove it! So it isn't a surprise to find our family camped out in front of the television over the weekend, watching an international track meet.

Part of the recent history of distance running includes amazing athletes from Kenya. My husband raced against many. And while the United States has improved internationally, Kenyans are still medal-winners in many middle and long distance races.

The start list of a recent race prompted a family discussion of names and naming customs. Many of the Kenyan athletes had the phrase "Kip" as part of their name. So we investigated.

These names belong to an ethno-linguistic group called Kalenjin. This is only a snippet of a complex custom, similar to patronymic naming. I am certainly no expert, just a fan, and there are many articles online, including Kenya Runners and Kenyan Names if you are interested in reading more. When the London Olympics roll around later this summer Moscow World Championships start this weekend and you hear a Kenyan name announced, you'll know how to find out what it means. This is how two of my worlds - genealogy and running - collide.

Reprinted from my May 26, 2012 post with minor edits re: World Championships

On Monday, I posted the obituary, or more accurately, the newspaper article chronicling the death of my ancestor, Johann Lorenz "Lawrence" Hummel. Horrifically, he lost his balance and fell to his death down the backyard well, fetching a pail of water.

I debated transcribing and posting the article. The descendant in me was horrified by his demise, but the genealogist in me felt the information and context would serve the greater good, especially for those future cousins I may meet out there. Even speaking to my grandmother about him, who she never knew, he was always 'grandpa that fell down the well.'

Readers of my blog may recall the previous article I posted documenting the Hummel's runaway horse. The horse seemed to often be spooked, and frequently caused mayhem enough that led to detailed newspaper articles, injuries, and even death. This typical feature of small-town life, the horse and buggy, cast a large shadow over the Hummel family.

The article mentioned in great detail Lawrence's injuries. The writer concluded that previous falls from runaways may have contributed to his death. Perhaps Lawrence had a concussion that never healed, or even more permanent brain damage. My children are athletes and are very familiar with required concussion testing today. Back then, who would have thought literally falling off of a horse would contribute to a death?


I also wonder what effect this incident had on the lone witness - my great-grandfather, William Hummel. He must have been traumatized by the accident as a five-year-old child. This is one of those instances where I wish I could have asked him, but I may not have wanted to have him relive the accident. And do I really want to know?

For now, I will appreciate the detailed article as an important, if horrifying, piece of my greater family history.

Plunge to His Death 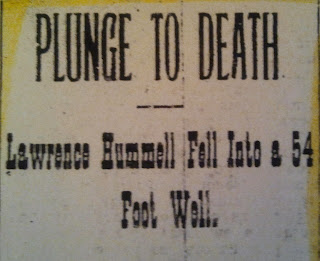 DEATH MUST HAVE BEEN ALMOST INSTANTANEOUS

Michael Sorter Was Lowered After the Body

Deceased Was an Old and Respected German Resident
___

Lawrence Hummel, sr., an old and respected German resident of this city, met with a horrible accident about 10 o'clock this morning, at the home he had occupied for some time, just opposite St. Joseph's academy on North street. He was dead when found. The unfortunate old gentleman pitched head first down a well at the rear of the house, and was badly mangled about the head.

The well is an open one, bricked up from the bottom 54 feet below, and had about 18 inches of water in it. At the top there was a curb, on top of which was a well house with barriers and a roof. Int the roof was a large pully [sic], over which a rope worked to let the bucket down. The bucket had been dropped, and Mr. Hummel was trying to fish it up from the bottom with the rope. He was leaning over the barrier and in some way lost his balance, pitching head first down to the bottom.

The only person within sight was his little grandchild, Willie Hummel, aged five years, who was in the back yard watching his grandfather. He saw him go and ran screaming into the house. The child's mother immediately gave the alarm, and the telephone was put into active use. It was a fearful time for the family, who suffered all kinds of tortures until help came. Marshal Ullrich was soon on the scene, and Michael Sorter came with tackle and ropes. Mr. Sorter was lowered into the well and fastened a rope around the dead body. Mr. Sorter was hauled out and then the remains of Mr. Hummel were next brought to the surface. The poor man was almost completely submerged in the water, head down. Dr. Esli Morden was on the scene when he was brought out, but life was extinct, and his services were not needed. The head was horribly mutilated, where it had struck against the stones and brick. The right eye was mashed in, a horrible cut nearly severed the right cheek, and he was otherwise badly bruised and cut.

Coroner Hamilton was summoned, but after learning of the nature of the death an inquest was thought unnecessary. The remains were taken to the home of Geo. C. Burger, No. 60 Locust street, on account of the fact that the house was being broken up. Lawrence Hummel, jr., is to live over Mr. Grabner's store on North Main street; Mr. McDonald and family are moving over near the college. Their goods were all packed and partially taken out of the house. The unfortunate father was to live in the house with some parties who had rented it, he being the owner of the property. The house was therefore stripped of furniture for the present.

Dr. Esli Morden states that Mr. Hummel was subject to fits of dizziness ever since he was caught in a runaway some-time ago, and nearly killed. It must have been in one of these fits that he plunged into the well. The unfortunate man's neck was found to be broken, but no other bones were broken.

Deceased was born in Wuerthenburg [sic] , Germany, May 16, 58 years ago, and came to this country when a young man. He lived in Coldwater for some time where he married. Then he moved to Adrian and was employed for 25 years as a cabinet maker at the Lake Shore shops. His wife died about seven years ago. He was a hardworking, honest German citizen. He leaves the following children to mourn him: Miss Carrie Hummel, Mrs. Wm. Reitz, Lansing, Mrs. Edward Spies, Fairfield; Lawrence Hummel, jr., Hugo Hummel, Herman Hummel and Arthur Hummel, the latter a carrier boy at The Telegram office. There are two grandchildren: Wm. Hummel, son of Lawrence, jr., who was with his grandfather, and a daughter of Mrs. Edward Spies.

Hummel's By The Numbers

My Hummel family of Adrian, Lenawee, Michigan was led by immigrants to the Midwestern US, much like hundreds of other families of the mid-1800's. We learned previously that they had a "spirited" horse that drew the family buggy. It was transportation but it was also the catalyst for many mishaps, and ultimately even the death of son Otto in 1897.

Before we learn of the fate of the progenitor, Johann Lorenz "Lawrence" Hummel, let's fill in some detail about the family. Lawrence was married to Christina Carolina "Carrie" Ebinger in Michigan in 1869. They were both German immigrants. They had ten children in total:

Carrie Hummel died in 1895 from intestinal complications, She was only 46 years old and left several children still at home. By 1902, all of the surviving children, except Herman and Arthur, had married and most moved north to Lansing, Ingham, Michigan. The Hummel's all worked as laborers and tradesmen, first in manufacturing, then in automobile and ancillary production work.

Next, we will learn the circumstances regarding Lawrence's death.
© 2013 Sally Knudsen
Posted by SallySearches at 6:30 AM