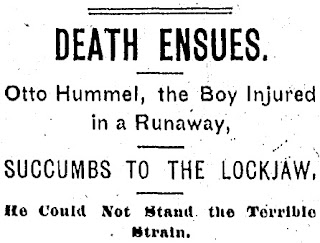 Otto Hummel, aged 14, who in company with his father, Lawrence Hummel, and younger brother, Arthur, was caught in the bad runaway accident, on East Maumee street, on the evening of the Wednesday, May 7, died from lockjaw, this morning, at 4 o'clock, at the home of his parents on North street.

The details of the horrible affair were given in full in The Telegram at the time. It was thought at the time that the father was the most seriously hurt, and young Otto was not thought to be in any danger. The injury to the skull, which showed a small contusion became very painful, and last Wednesday that dread disease lockjaw developed. He lived in great agony until 4 this morning, when death came to his relief.

The little sufferer behaved manfully through all the ordeal. It was necessary for the past four or five days to give him food through a straw.

His father seems to be recovering slowly, and the younger brother, Arthur, is not materially showing any bad results from the accident.

The funeral of Otto Hummel will be conducted Thursday afternoon, probably from the home.

***
Lockjaw is a disease that we refer to as tetanus. It is not a disease transmitted by human contact, but rather from environmental hazards. The Centers for Disease Control says:

The bacteria are usually found in soil, dust and manure, and enter the body through breaks in the skin - usually cuts or puncture wounds caused by contaminated objects.

Otto Hummel was violently thrown from a runaway horse and buggy. After cutting his scalp open on the pavement of an 1897 street, he was a prime candidate for bacteria from dirt and manure. Lockjaw causes the jaw, then other muscles, to painfully tighten in the body. Other symptoms include fever, sweating, and difficulty swallowing. If poor Otto was being fed through a straw, he was clearly fully consumed by the disease. Lockjaw can be treated with antibiotics - which didn't exist at the time. Vaccinations for tetanus now keep lockjaw at bay, as only about 30 cases appear in the United States each year.

Otto Hummel may have "behaved manfully," but he still died too young from a horrible disease. Rest in peace, Uncle Otto.