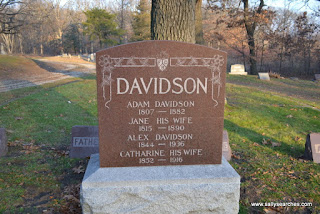 This photo of the Davidson family tombstone is crisp and clean. The stone holds four clear names and dates.

The Davidsons are buried in Oakwood Cemetery, outside Braidwood, Will County, Illinois. Adam and his wife Jane were Scottish immigrant farmers to this primarily mining community.

On the top of the stone is a shield and the letters F C B. This is a traditional etching showing membership in the Knights of Pythias fraternal organization.

The Davidson family came to America in May of 1860. In addition to their son Alex, they also crossed the Atlantic Ocean with a daughter called Mary Jane and a son called George. In 1870, they were enumerated in nearby Wilmington and in 1880 in Braidwood. Alexander was always living with or next to his parents at each census, so it seems fitting that they are buried together in Oakwood.


Posted by SallySearches at 6:30 AM