Luck of MY Irish

I've always known I was of Irish descent. It was nice of my various DNA tests to confirm it. The testing companies show my ancestral heritage to be about 50% Irish. Most of it is from my dad's family.

I always had trouble actually FINDING my Irish ancestors. As more and more records became available, I did. They led me on a hunt for McBrides from Illinois to Birtley in County Durham, England and finally to County Tyrone in Northern Ireland. But like many researchers, this is where I got stuck.

Knowing County Tyrone was pretty cool, but not quite enough. I wanted to know where. Like, exactly where? Like, what parish and townland where?

DNA to the Rescue

I've done DNA testing everywhere possible. It's been more than four years since I got my first set of results back, and at times it can be tedious and frustrating. I hope to use my DNA to map my entire chromosome and use those segment matches to locate other distant relatives and confirm ancestries.

I have never been a died-in-the-wool fan of AncestryDNA due to its lack of segment data and spotty messaging system. I continue to pursue matches there but don't expect much. However... I did have a breakthrough!

Last October, I had a new "third cousin" named Jessica show up in my results. She did not match my mom, who also tested at Ancestry, so this was intriguing. She had a handful of people in her tree from Chicago. She also had some unique names I could trace back to Joliet, Illinois, where my dad and I were born. Yet, I still didn't recognize the names. I sent Jessica a message and didn't hear a thing. Typical. I waited another month and sent a second. Still nothing.

In April, Jessica wrote back.

She apologized for just receiving my messages and for not really understanding how to reply within the system (see, Ancestry 😠).

We discovered we are second cousins once removed (2C1R) through our shared McBride ancestor, John Joseph.

These are the only matches Jessica and I have in common. I had written to WM via his wife and learned we had emailed many years ago. WM is also a McBride descendant but his wife, the family historian, was stuck at the same place as me. They, however, still live in County Durham. Their daughter Jess had also tested.

Then I wrote to John. John had no tree but since he already matched two known McBride cousins, it was worth a shot. Two days later, I heard from John. He likely had to be picked up off of his floor!

Here is the McBride descent and DNA tree:

Bridget McBride married in Ireland. Alexander, Jane, Daniel, and Edward all married in Birtley and all named Daniel as their father. They all lived near each other and worked in various mines.

From my new cousin John I learned that his great-grandfather Felix was sent back to Ireland after his parents had a number of children die. They hoped for a better life for him. He eventually married and emigrated to Scotland. My ancestor Daniel did similarly: he and Mary Ann lost their first two children to scarlet fever, then sailed for America in 1880 with their surviving son, John.

John and I exchanged a number of emails with records and family stories. His mother is 93 and she thought she was the last of the McBrides. Surprise! I also learned that when Felix was sent back to Ireland, it was to where Alexander came from - Dunnamore. 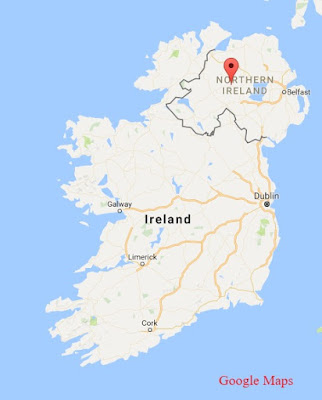 Dunnamore is a village located in Kildress Parish near the city of Cookstown, almost centrally located in Northern Ireland. It even has a neolithic stone circle called Beaghmore. Swoon.

I have more work to do to find traces of my McBrides in Ireland. The teen and young adult siblings left Ireland for England between 1851 (not on the UK census) and 1861 (all on the UK census). Did their parents, or at least Daniel as head of household, die and the famine forced an exodus? Griffith's Valuation was in its early stages and doesn't show a Daniel in Kildress. The Catholic parish registers at the National Library of Ireland do not have any of the siblings' birth records in Kildress.  The search goes on.

For now, I'm happy to have Dunnamore as an ancestral home.