Tombstone Tuesday - Of Miners and Blueberries

The small town of Braidwood, Illinois was a boomtown in the 1870's and 1880's when coal was discovered. Mining began in earnest and soon Braidwood was home to thousands of immigrants. Thomas Allen and his wife, Elizabeth Goodwin Allen, my step-great-great-grandparents, settled in Braidwood and raised many of their 13 children here. Their gravestone sits on a small hill in the front row of Oakwood Cemetery along a two-lane county road outside Braidwood. It is easy to spot, mostly because it is tipping over. In the morning, it is draped in shade. In the afternoon, its grey marble reflects so much sunlight that it has been nearly impossible to take a "good" photo of it. 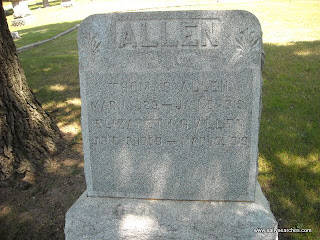 too early and shady 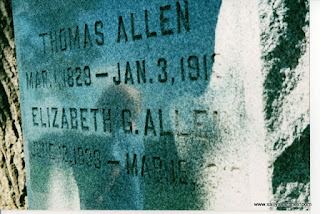 too late and sunny

Also note the sunny reflection of my son in the second photo. I was reminded of this photography experience because my son usually accompanies me to pick blueberries at a farm just down the road from the cemetery. And yesterday, I picked blueberries and waved to the Allen's on my way home. 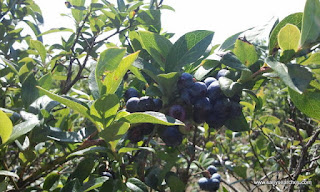