Fourth of July has rolled around again with all the celebrations that entails. My family will celebrate Independence Day by cooking out, eating, eating some more, and watching fireworks, perhaps legal and perhaps courtesy of some rogue neighbors.

In addition to the mainstream festivities, I sometimes think about the Fourth of July in more historical terms. I do consider myself a genealogist, after all. Most family historians have probably attempted a little melting pot analysis of some kind. I have written prior posts on some of my background (pretty much Northern European) and the results of my mtDNA test (pretty much Northern European). I created the chart below breaking down the basic ancestry and emigration information on each of my 16 great-great-grandparents.

My paternal side (top half) is almost entirely of the Emerald Isle. My ancestors left Ireland for England, Scotland and the United States. It honestly surprised me a bit as I see them all grouped together: all eight of my paternal ancestors came to America in the same generation! And even though we often think famine regarding Irish ancestors, mine came quite a bit later (although some went to Scotland and/or England first). Facts are fun!

My maternal side (bottom half) is slightly more varied: German, Germans from West Prussia, a line from Scotland. The Prussian and German emigration in the mid-1800's was due to political unrest in Prussia and Eastern Europe. And then there are my "New Englanders I know to around 1800" lines. My Spencer line went from Rhode Island to Vermont in the Revolutionary War era, but I haven't yet found soldiers. I have a tenuous war connection through my Frederick line, but I haven't personally researched those facts. I know about these families to around 1800 in America. I have no idea of their ancestry or when these lines arrived here.

I only have one quarter of my ancestry who would have potentially been on American soil in 1776. America is truly a melting pot, as evidenced by my, and probably most of your, ancestors. 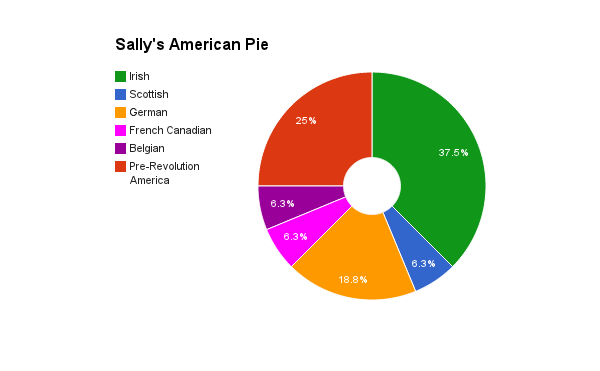 In honor of the 237th birthday of America, this is my American pie. A real fruit pie tastes better but this pie will keep me more fulfilled and happily researching for a long, long time.

Photo in the public domain