My selection(s) for this week's 52 Ancestors post are the parents of Louis Blanchette. They are Seraphin BLANCHETTE and his wife, Marie-Edesse DIONNE.

I don't know a whole lot about Seraphin and Marie-Edesse beyond facts. I do have a lot of facts, though. Let's examine their marriage record, found in Ancestry.com's digitized Drouin collection.

Got it? Actually this massive description of the 1823 marriage between Seraphin BLANCHETTE and Marie-Edesse DIONNE is filled with information. Below I have underlined some of the key pieces. 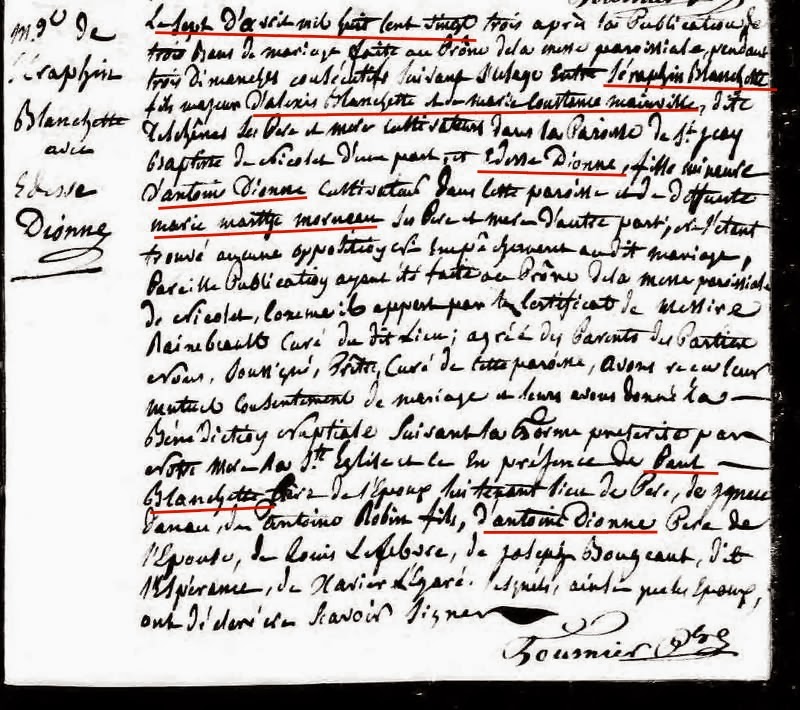 Clearly, there is considerably more detail but I have only selected the most important details to extract. Note the comment in the margin of the book to denote the 'marriage de Seraphin Blanchette avec Edesse Dionne.' The records contain so much genealogically relevant information. It does take some effort to translate, but locating the important words and phrases is the start to understanding what the record contains. They then open up more avenues of researching family relationships.

Seraphin and Marie-Edesse had the following known eight children:
Only Julia and Louis left Quebec, based on my research to date. I have learned that Marie-Edesse died in 1881. I have not, after hours of reading records, found a death date for Seraphin. In the 1856 marriage record for their son Joseph Seraphin, Seraphin is noted as deceased. For now, that is my only clue.

Prowling through the amazing Drouin records has given me a very large French-Canadian branch of my family. Bonjour to you all!

The BLANCHETTEs are all paternal family members.

BLANCHETTE surname and variations in my database