Jacob COUNTRYMAN was my 3x great-grandfather. The Countryman line was one of the first lines I discovered early on in my genealogy quest, a line that my living relatives did not know.  Trying to learn more about him was an adventure in making message board connections and in renting microfilms. Ah, memories!

Jacob and Amelia did not have a child until my great-great grandmother May Genevieve was born in 1864. Four more daughters followed. The 1880 census is the only time the entire family appeared together:

Finding Jacob's parents was more difficult. With the expert work of many Countryman researchers, Jacob was determined to be a child of Peter COUNTRYMAN and Matilda AMES (more on them in a later post). Jacob also had a brother Daniel. Daniel first lived in Jackson County, then moved to Trego County, Kansas.

I finally got to see what Jacob and Amelia looked like after meeting with a cousin who held many family photos. This is a photographic reproduction of her original tintype:
Here are Jacob and Daniel together. Look at those hairlines! I know the copy of a copy of Daniel's photo is not the best, but you could not have shaped their heads to look any more similar. 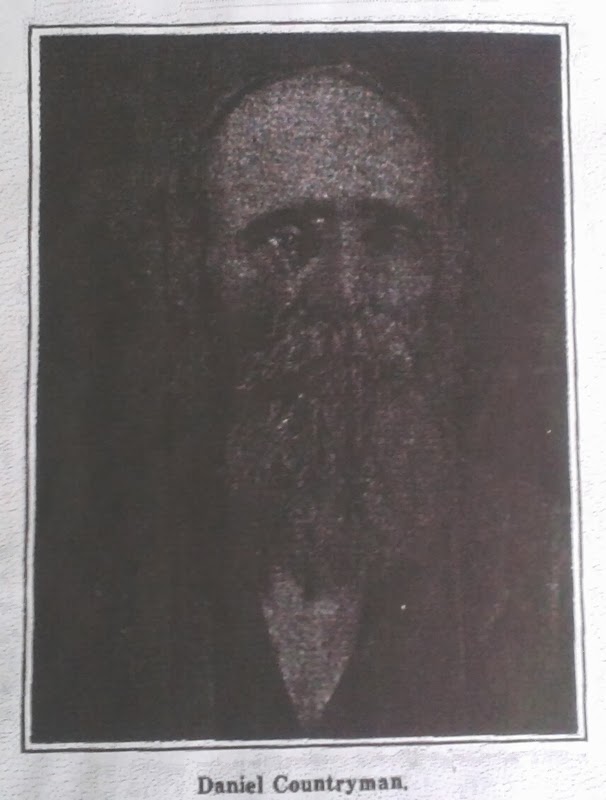 These are the only photos I have of Jacob and any of his siblings. Of course, I would be curious to know what any of the others looked like, especially the men.

Jacob died at the home of his daughter, May Genevieve COUNTRYMAN SPENCER on 20 July 1895 in Locke Township, Ingham County, Michigan. He is (most likely) buried next to his wife Amelia in Graham Cemetery, Woodhull Township, Shiawassee County, Michigan. I say 'most likely' because there is no stone for Jacob. There is, however, a dual mount missing a stone, so I am pretty comfortable knowing they are indeed buried together.
(c) 2014 Sally Knudsen
Posted by SallySearches at 12:57 PM