Peter COUNTRYMAN died. He was intestate. And he was in debt.

Peter had quite a file of documents that I located at the State Archives of Michigan in Lansing several years ago. Sometimes being in debt isn't such a bad thing: it produces paperwork.

Peter was a son of Jacob COUNTRYMAN and Margarethe MEYER and was born about 1800. He and a number of his siblings moved from Ontario to New York to Ohio, finally settling in Ingham County, Michigan in the 1830's. Much of his early life is unknown. His wife was Matilda AMES and they had seven known children: Rachel, Joseph, Isaac, Jacob (previous post), Margaret, Daniel, and Peter. Matilda likely died even before Peter.

An early settler in Phelpstown Township, Ingham County, Michigan, Peter owned a 40 acre farm. For reasons unknown, he had a large debt to his brother Jacob for $13.00. Then before the loan was repaid, Peter died intestate, or without a Will, on 30 August 1844. And he owed a lot of money. Having no Will means there is no legal direction to pay debts or distribute assets. The court will appoint an impartial administrator to appraise the assets and allow any claims to be filed for payment from those assets.


Here is a timeline of the documents in Peter's probate file:

This is the final administrator's report of all of the debts Peter owed to various merchants, as well as costs incurred during the administration of the estate:

There were no documents discharging the administrator. However, since the real estate was the last item in the inventory, this was probably the end of the court matter: can't get blood from a stone, as they say.

Finding a 170 year old probate file was a huge coup. It answered questions, while raising others. It mentioned Peter's brother and named in-laws and neighbors. It described his land and all of his household possessions. It even contained a promissory note with his signature!

It did not, however, mention his wife or his children. We know the children were set up in local households after their parents' deaths, but it would be nice to have details. I don't know where Peter and Matilda are buried.

But the most intriguing piece of this file was this scrap of a note: 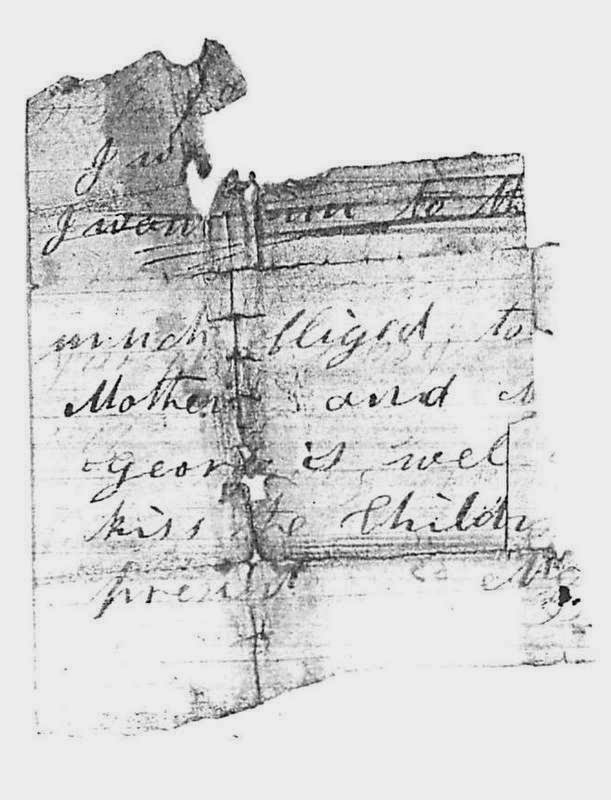 Some secrets, and debts, will be taken to the grave.

Peter's page in my database

Posted by SallySearches at 9:56 PM