My great-grandfather, John Joseph McBRIDE, lived a hardworking but short life. Born in Birtley, County Durham, England in 1873, he emigrated to Illinois with his parents, Daniel and Mary Ann, in 1880. In 1902 he married Margaret Donaldson KERR. They had one young son, and two infants that died. Margaret was pregnant in 1909 when 'Joe' came home from work one afternoon and succumbed to pneumonia. He died in Joliet, Will, Illinois.

Will County is my home county in Illinois. It borders Cook County and Chicago to the southwest. Joliet has always been a fairly large city (today over 100,000 people), and has supported various newspapers over the years. The longest running is the Joliet Herald-News. Other papers came and went, especially in the late 1800's and early 1900's. The main branch of the Joliet Public Library has all of the available newspapers on microfilm.

The Will County Clerk's office has two huge binders containing the indices of deaths. They have the binders (thankfully!) because Will is a 'certificate' county and not a 'ledger book' county. It is much more difficult for the staff to locate a filed certificate than for a patron to review a chronological ledger book. My research practice has always been to review the index first and search for an obituary at the library. Especially if the person is not a direct ancestor, I'd rather spend a quarter to print the article than $13 to order the death certificate.

I found that two newspapers had an obituary for John in 1909: 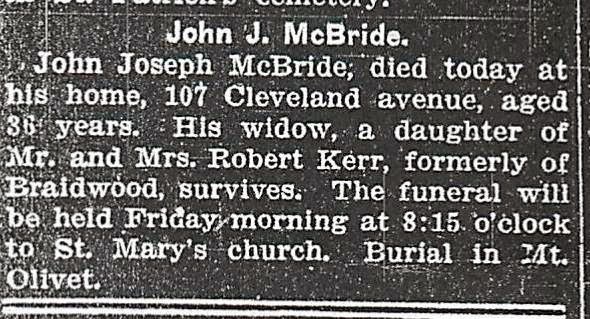 The above notice was published in the Joliet Evening Herald on Wednesday, 10 March 1909. It has true and useful facts. 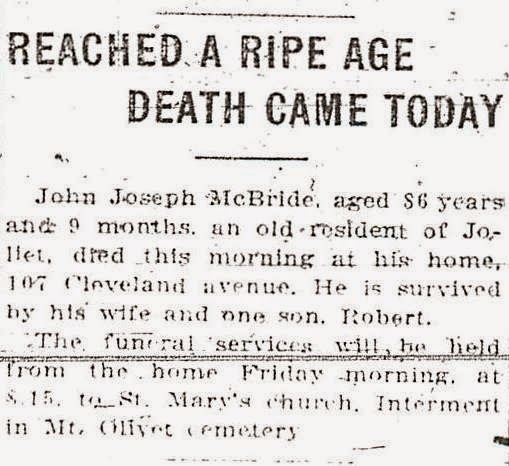 Holy typo, Batman! I wonder how the error in the second notice happened. Eighty-six is a whole lot different than 36.

Had I only found the second notice and not yet known much about this family, I would have been searching for records for a long, long time. This instance certainly shows that finding as much documentation as possible for your ancestors is so important.

Just because it was printed in the newspaper doesn't mean it's true!