This #52Ancestors entry is a maternal great-great-grandfather, Asa Wyman SPENCER.

Asa was named for his paternal grandfather Asa SPENCER and his maternal grandmother Betsey WYMAN. He also has a genealogically interesting fact: he was born on 1 Jun 1850 - census day! Fortunately for my recordkeeping, the census in his town was taken on 16 July and Asa was listed as age one. Good enough for me!

Asa was born in the Town of Sheldon, Wyoming County, New York, which is about 40 miles east of Buffalo. His parents were Wright SPENCER and Sarah 'Sally' JOSLYN or JOSLIN. He was the third of eight children.

The SPENCER's lived in Sheldon until about 1868 when they moved west to Ingham County, Michigan. Many families from Wyoming County settled near each other in Ingham County. Asa was working as a farm hand in 1870 at a neighboring farm. By 1880, he was in charge of most of the daily farming of the family farm, to the point where his aging father deeded most of his 90 acres to Asa.

Asa married May Genevieve COUNTRYMAN in 1883. Asa and May were 14 years apart in age, perhaps a lot by today's standards, but not so odd then when a thriving bachelor farmer needed to take a wife. They had six children, five of whom reached adulthood: Beulah (died in infancy), Roy, Edward, Bessie, Burr, and Florence.

In addition to farming, Asa served his community as the Locke Township clerk in the early 1880's. He appeared to be a well-respected local man, so it came as a great shock to his family and his community when, in 1911, he had surgery for a ruptured appendix and died of complications shortly after. He was only 60 years old.

Asa is buried with May in the large SPENCER family plot in Rowley Cemetery in Locke Township. 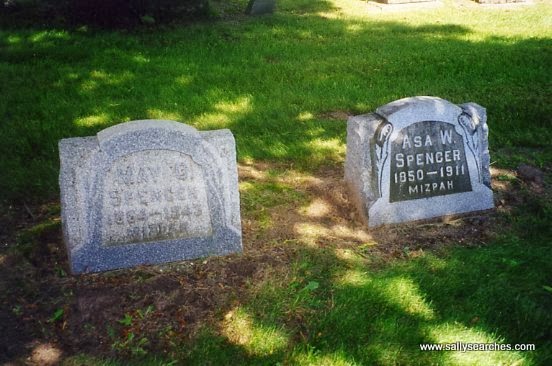 Asa's page in my database