After a real-life absence (kids, holidays, kids, etc), I am back on the #52Ancestors blogging beat! And just in time - I have reached my SPENCER family, which were my first real searches and my most hopeful break-down-a-brick-wall family.

In October, I introduced my grandfather Dallas Frederick SPENCER. Today it is his father's turn for an introduction.

My great-grandfather was Edward J. SPENCER. Like his son Dallas, he was also born on the SPENCER family farm in Locke Township, Ingham County, Michigan. Ed, as he was commonly known, was born on 10 Jun 1888 to Asa SPENCER and May Genevieve COUNTRYMAN.

Ed and his siblings, and later his own family, lived a typical farm life in Michigan. The SPENCER family ran the farm until just after Ed's father died suddenly in 1911. His mother May, Ed, his wife and children and some siblings moved in to Lansing so the family could find better work in the booming automotive industry in Lansing. Not only were Detroit, Flint and Lansing filled with southerners coming north for work, they were also the destination for rural families like mine.

Ed married a local Locke girl who was his down-the-road neighbor, Lulu Gertrude FREDERICK. They married in 1913 and had two sons right away, and two more children after the move to Lansing.

And then the unthinkable happened: Gertrude died of pneumonia in 1925. At least by now, Ed and his children were already under the multigenerational roof of his mother for I'm sure both financial and emotional support.

Ed continued working in automotive industries. The SPENCER family was always pretty close, until my branch moved away to Illinois. Ed would visit occasionally and we would go to Michigan, especially for my summer birthday.

My great-grandfather passed away at age 88 on 9 May 1976. He is buried with Gertrude and many of his SPENCER relations in Rowley Cemetery in Locke Township. 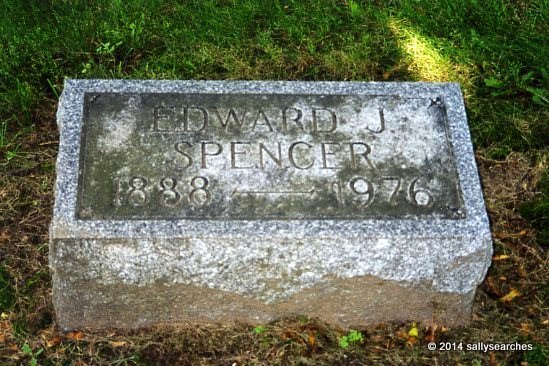 Edward's page in my database

Posted by SallySearches at 7:55 PM