This week on 52 Ancestors, we meet Sarah 'Sally' JOSLIN SPENCER, a maternal great-great-great grandmother. That sad face in the corner is me. Me, because I do not have a photograph or a description of Sally and I dearly wish that I did.

Incidentally, I am not named for Sally. However, the story of my learning about Sally and then sharing her name is even better. You can read it here.

Sally was born in Town of Sheldon, Genesee, New York in 1819. Her name at birth and death was Sarah, but all through her life it was Sally. Her parents were Benjamin JOSLIN and Betsey WYMAN. Betsey had a twin sister Sally, so that may be the origin of the name. Sally had an older brother Wyman and a younger brother Daniel.


Sally married a local Sheldon farmer, Wright SPENCER, in 1841. He was several years older and had his own farm. Sally and Wright had eight children:
Byron was their only child to die in New York. He was only six and I don't know the circumstances of his death. He is buried with his grandparents in Varysburg Cemetery. I can't imagine how Sally felt, literally leaving one of your children behind.

The SPENCER's moved west in the 1860's, like many families from this area, into central Michigan. They purchased 40 acres in Locke Township, Ingham, Michigan, which is just east of Lansing. Wright eventually had a farm of over 100 acres and as he aged, his son Asa took over the farm duties. 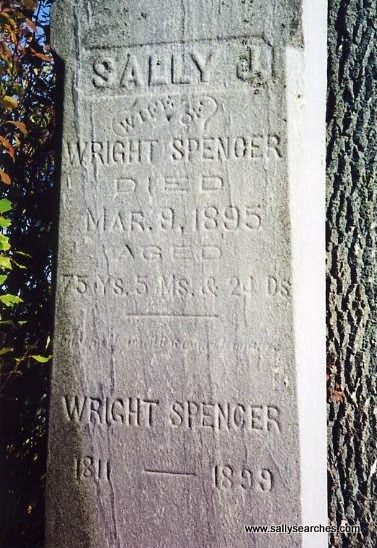 Sally died at the SPENCER family farm on 9 March 1895 and was buried in the local Rowley Cemetery.

I still wish I had a picture of her :(

Sally's page in my database

Graphic with free use license