This week we cross the North Atlantic and the Firth of Clyde, en route to Scotland and the home of my great-great-great-grandparents, Robert KERR and his wife Mary WILSON.

Robert and Mary were both born in Ireland, though I have yet to learn where. They first appeared in Scottish records in 1848, at their marriage in Kilbirnie, Ayrshire, Scotland. By 1851, they had adopted a daughter, Mary Jane, as well as boarded Mary's sister and widowed mother. Eventually, they had eight children of their own, all born in Kilbirnie. Robert and all of his sons worked in the local iron foundries.

I first learned about Robert and Mary from a somewhat mysterious 'photocopied page from family records that a cousin of my dad's gave me.' You know the sort.

Anyway, here is the page: 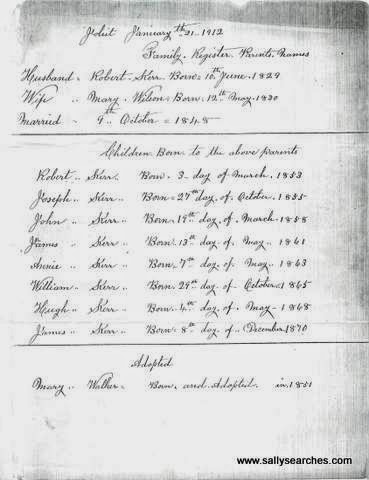 And I have been able to verify all of the records via ScotlandsPeople. Note that it is titled in Joliet, Illinois, and not Kilbirnie, Scotland. Their first son Robert is my ancestor, and to my knowledge, the only family member to come to America.

Mary died in 1890 and Robert in 1908 in Kilbirnie. I do not have burial records for them, but they are likely buried in the Kilbirnie Old Kirkyard.

Flag photo with free use license