Mother's Day has passed, but one of the strongest women and mothers in my family tree is my paternal great-grandmother, Margaret 'Maggie' Donaldson KERR McBRIDE.

Maggie was born in Kilwinning, Ayr, Scotland in 1876. As an infant, she traveled to America with her parents, Robert KERR and Sarah DONALDSON for new opportunities in America. Her life was filled with tragedies almost from the moment she set her tiny foot on American soil.


Barely a year later, in 1877, her mother was run over and killed by a coal train car as she collected extra coal along the railway lines in Braidwood, Will, Illinois. Robert then remarried in 1878 to Catherine ALLEN, and they had 12 children. Maggie was no longer an only child.

So Nice They Counted Her Twice

Maggie lived with her large family in Braidwood until the late 1890's, when coal mining took a downturn. They moved about 20 miles north, to the city of Joliet, Will, Illinois, which offered her father and eventually her stepbrothers other opportunities for employment. Robert, her father, found work as a prison guard in Joliet. Maggie was now also working as a housekeeper to assist the family. She was enumerated with her family in 1900 in Joliet:

She was also enumerated as Maggie Carr with her 'employer,' the McBride family:

All About The Brogue

Notice that the second census snip says 'McBrady.' This was one of my early Genealogy Happy Dance conquests. When I was initially searching for the McBride's, it was still in the days of driving to the library to read microfilm. I know where the family lived because my dad, aunt and cousins had been at that house on Cleveland Avenue. [That's what they all called it: the Cleveland Avenue House!] This entry is the third to last in this enumeration district, possibly because the house was skipped initially. When I finally saw it, I knew it was my family. Now try rolling your R with an Irish accent: McBride can easily be turned into McBrady, can't it?! I remember vividly being at the library, finding and printing this page, then asking random strangers what they thought the names could be. They concurred!

In 1902, Maggie married Joseph McBride. Both of Joe's parents had died by then, and he and Maggie started their life together in the Cleveland Avenue House. I'm sure it was somewhat a marriage of convenience: they already knew each other, they were about the same age, and Joe needed someone to look after the family home. They had their first child, Robert, in 1903, and then two infants that died. 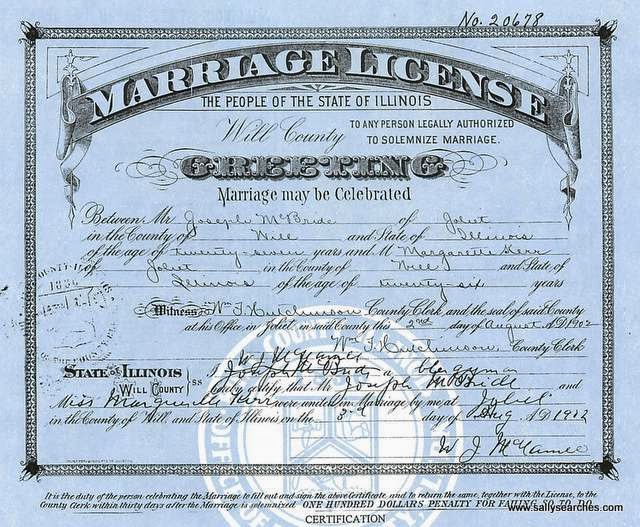 In late 1908, Maggie was pregnant with my grandfather-to-be, John. In March of 1909, Joe walked home on his lunch hour from the iron mill near their home. He was coughing uncontrollably and within a few hours, died of pneumonia. My grandfather was born six weeks later, and was rumored to be premature and fit in a cigar box. I suspect that the stress of losing your husband could bring on premature labor. Maggie persevered.

Maggie remained in the Cleveland Avenue House for almost the rest of her life. She never remarried and raised her two sons on her own. She was only ever occasionally listed as a housekeeper on the census records. As her father and stepmother aged, they moved into the house, and later her unmarried stepbrother did as well. The house was in the family for nearly 100 years, with various generations of KERR and McBRIDE family members residing there.

For all of the hard times she experienced, Maggie lived a good long life. She died at age 87 at home with her family. She is buried with her parents in Elmhurst Cemetery in Joliet, Will, Illinois. 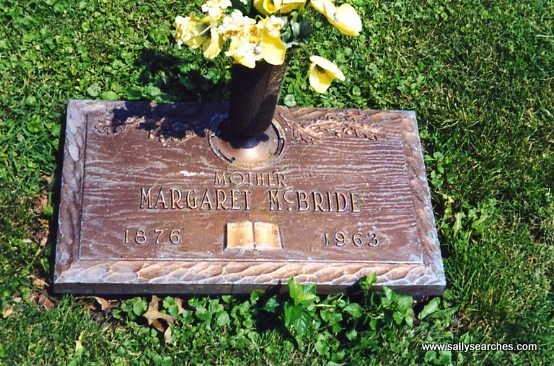 An interesting footnote to Maggie's life: my newly married parents were at Maggie's funeral when they learned of the death of President John F. Kennedy on 22 November 1963. That is a fact my father always remembers and it is fascinating how history intertwines with our lives.

Maggie's page in my database