Last week's post introduced Robert KERR and Mary WILSON of Ireland and Scotland. Their firstborn son was Robert KERR, born 3 Mar 1853 in Kilbirnie, Ayr, Scotland. Robert worked as a iron miner in Scotland like his father and brothers.

In 1874, Robert married Sarah DONALDSON and shortly thereafter, had a daughter, Margaret (or Maggie) DONALDSON KERR. The young family set off to America, presumably in search of a better life. They arrived in Illinois in 1876. Robert was a widower within the year. You can read his wife Sarah's sad tale here. On New Year's Eve of 1878, Robert married for a second time to Catherine ALLEN, the daughter of Scottish immigrant miners. Robert and Catherine went on to have 12 children.

For several years, Robert continued to work in the coal mines of Braidwood, Will, Illinois. The coal mines eventually ran 'dry' and workers moved away to find other employment. By 1900, the KERR family lived in Joliet, Will, Illinois. Robert worked as a prison guard in the famous/infamous Joliet Correctional Center.

Robert died in Joliet on 18 Oct 1927. He is buried in Elmhurst Cemetery in Joliet with Catherine and many of his family members. 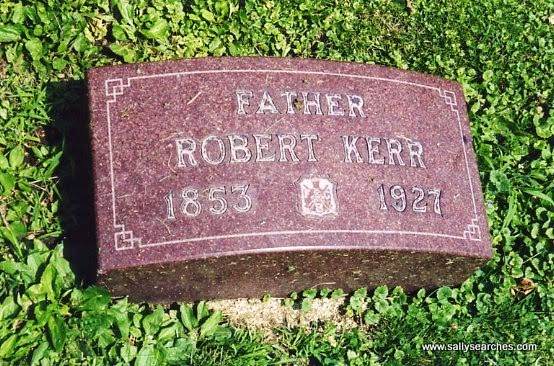 Robert's page in my database