Mystery Monday - Why Do I Have These Photos?

Recently, Ancestry.com put a helpful set of records online: Saint Dennis Catholic Church records from Lockport, Will, Illinois. Saint Dennis is the home parish of my McWeeney and Riley lines.  As I was browsing through some of the entries, I found several 1860's and 1870's baptisms with parents Ellen McWeeney and Charles Runyan or Runyon.  I have four documented McWeeney children, but none of them are an "Ellen". In addition to having another possible relation, the name "Runyon" also carried some nagging familiarity.  But why?

Then I remembered some old family pictures.  I dug around and found them. 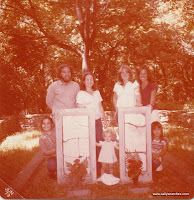 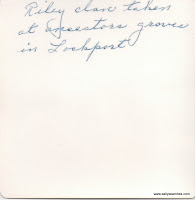 This photo was taken by my grandmother in 1979 when the "California cousins" were visiting Lockport.  The inscription on the back is in my grandmother's hand:

Now I have been researching the family for quite some time and this was news to me.  What ancestors? And where were these graves located? And who are the people in those graves?

I learned the graves were in a tiny family cemetery on the north side of Lockport called the Runyon Cemetery. The patriarch, Armstead Runyon, was one of the first settlers in the area. When the I & M Canal became a possibility in the 1830's, Runyon hoped to sell his land to the canal commissioners. It was not to be, and the canal office was opened in what is now downtown Lockport. Runyon moved on to California, but not before his first wife Anna and some of his young children died in Lockport.

I am excited to chase down this connection between the McWeeney's and Runyon's. I suppose this is why I have these photos!