Today wraps up my research journey of the Blanchette family.  If you want to catch up, the first two posts are here and here.

We will start with my great-grandmother and work backward.  Clara Regina "Rena" Blanchard was born in 1882 near Chippewa Falls, Chippewa, Wisconsin.  Her parents were Louis Blanchette, the subject of these posts, and his wife, Mary Virginia Richard of Belgium.  Rena was the 11th of their eventual 14 children.  Louis continued his work as a small time farmer and lumberman along the Chippewa River.  Sadly, Mary Virginia died shortly after giving birth to their last daughter, baptized Virginia Mary.  This left Louis in the northern woods with 11 surviving children and little help.

During the 1890's, Rena was sent to live with her Aunt Julia and Julia's second husband, Solomon Hough.  The Hough's were living for a short time in the busy canal town of Lockport, Will, Illinois.  They all appear together there on the 1900 census.  Julia's children were all grown, and Julia and Solomon's only child together died as an infant.  Rena lived a happy and almost spoiled childhood with her aunt and uncle.  She graduated high school and took music lessons.  In 1902, she met and married my great-grandfather, John Patrick Riley of Lockport.  The newlyweds moved to Chicago for Grandpa John's work, and the Hough's moved back to Saugatuck, Michigan to be near Julia's grown children.

Julia Blanchette Richards Hough died in 1914, at the Soldiers Home in Grand Rapids, Kent, Michigan.  This is her death certificate provided online by SeekingMichigan.org.  Of significance are the birthplace of Canada, a father's name of Blanchard, and best of all, her birthdate of 7 September 1832...matching exactly her birth record from the tiny town of Baie-du-Febvre in Quebec.  Her death certificate was finally that one clue that wrapped the pieces together.

Because my great-great-grandfather Louis Blanchette left Canada at such an early age - likely a teen - and with little education, he never truly knew his birthdate.  His Civil War pension papers are also vague.  He generally used December 1840 as his date. My Louis also never used a middle or baptismal name. This led to the confusing conclusion my cousin came to, because there WAS a Louis Onesime Blanchette born at this time.  But upon closer inspection of ALL the area church records, he was the wrong Louis, both by name and because he did not survive childhood.

It took me several years to piece together all the facts.  I tend to jump from family to family in my research, based on record availability.  Once I was able to access the Drouin records and compile the information myself, the family became clear.  This case demonstrates the need for working backward in time (seeing who Rena lived with and where) and tracking collateral or sibling lines (learning Rena was raised by Aunt Julia, then tracing Julia's past).  I have also been able to accurately trace the Blanchette family into the 1770's in northern Quebec.  This was a great use of primary and secondary research sources tied together with colorful, but not always accurate, family stories.  Using both made a greater whole than they would have independently.

In my cousin's family book, she noted that Julia took in Louis after he ran away from home.  She does not say where specifically, but we now know that they lived together in Saugatuck.  Louis's woodsman skills came in handy as Saugatuck was a booming milling town along Lake Michigan in the mid-1800's.  But not only did Julia help Louis, she was instrumental in raising Great-Grandma Rena as well.  And because so many genealogists love a good coincidence, those few years living in Illinois - the only time ANY of the Blanchette's did - were what caused me to be an Illinoisan by a few simple twists of genealogical fate :) 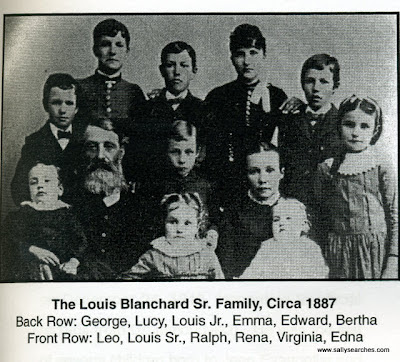