THIMBY Thursday - The History In My Backyard - Abraham Lincoln

I was recently in the city of Ottawa, LaSalle County, Illinois (professionally, not genealogically - rats!) and as I drove downtown, noticed this park and statue.  I had my trusty camera, so I parked, walked around, and snapped a few photos.

Downtown Ottawa is the home of the first Lincoln - Douglas debate, occurring in 1858.  The event is memorialized on the large plaque erected at the entrance to Washington Square. 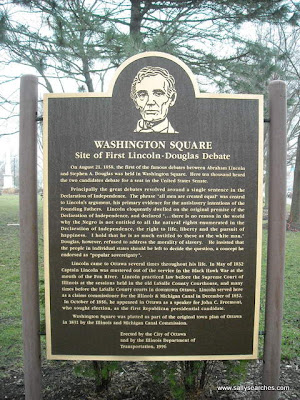 The text of the plaque reads:
~~~
WASHINGTON SQUARE
Site of the First Lincoln - Douglas Debate


On August 21, 1858, the first of the famous debates between Abraham Lincoln and Stephen A. Douglas was held in Washington Square. Here ten thousand heard the two candidates debate for a seat in the United States Senate.
Principally the great debates revolved around a single sentence in the Declaration of Independence.  The phrase "all men are created equal" was central to Lincoln's argument, his primary evidence for the antislavery intentions of the Founding Fathers.  Lincoln eloquently dwelled on the original premise of the Declaration of Independence, and declared "...there is no reason in the world why the Negro is not entitled to all the natural rights enumerated in the Declaration of Independence, the right to life, liberty, and the pursuit of happiness.  I hold that he is as much entitled to these as the white man."  Douglas, however, refused to address the morality of slavery.  He insisted that the people in individual states should be left to decide the question, a concept he endorsed as "popular sovereignty".
Lincoln came to Ottawa several times throughout his life.  In May of 1832, Captain Lincoln was mustered out of the service in the Black Hawk War at the mouth of the Fox River.  Lincoln practiced law before the Supreme Court of Illinois at sessions held in the old LaSalle County Couthouse, and many times before the LaSalle County courts in downtown Ottawa.  Lincoln served here as a claims commissioner for the Illinois & Michigan Canal in December of 1852.  In October of 1856, he appeared in Ottawa as a speaker for John C. Freemont, who sought election, as the first Republican presidential candidate.
Washington Square was platted as part of the original town of Ottawa in 1831 by the Illinois and Michigan Canal Commission.

Erected by the City of Ottawa
and by the Illinois Department of Transportation, 1996 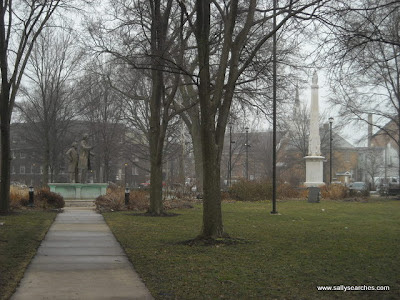 view of the park, memorial statue, and Veteran's monument 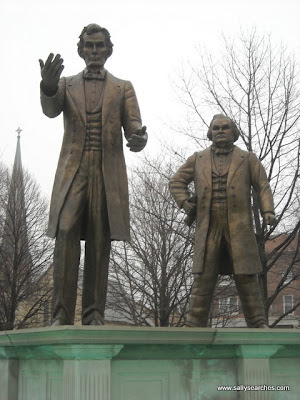 Lincoln and Douglas
What a great and unexpected peek at history!  Ten thousand people at the debate?  Imagine if your ancestors were there.  I wonder if it held the same meaning at the time as it does historically.
What can you share from your backyard?
***
Posted by SallySearches at 6:50 AM