Thomas Riley is my oldest known Riley ancestor.  He is also one of my least known, genealogically speaking.  I have him fairly well documented for the last 40 or so years of his life, but his beginnings are a mystery.

Thomas Riley's first appearance in a US record is his marriage to Mary Ann McWeeney on 3 June 1865 at St. Dennis Church, Lockport, Will, Illinois.

He appears on the following US censuses:

Thomas died in 1915 and is buried without a gravestone in St. Dennis a/k/a South Lockport Cemetery.  His death record at the church states he was 75 and born in West Meath, Ireland.  Is there a "West Meath" or does this mean County Westmeath?  Thomas's birth ranges from 1830-1840 and his immigration from 1844-1855.

His last name can also be spelled differently.  The census records alone have Riley, Reilly, and Rihley.

I have a lot of clues but not a lot of certainty.  Are you related?  Do you have experience with Riley's and/or County Westmeath?  Let me know! 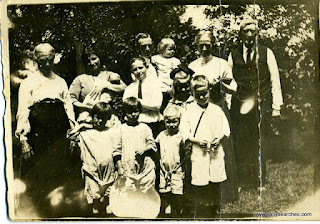