Of my eight great-grandparents, three of them are of full Irish ancestry.  Using my basic math, that makes me 3/8ths Irish.  In other words, 37.5% of my DNA is probably* green.
*No scientific sources for that fact!

from County Westmeath
immigrant and oldest known ancestor is Thomas, born circa 1840, died 1915
arrived in Illinois as a child with unknown family members
settled in Lockport, Will, Illinois during height of I&M Canal construction
married Mary Ann McWeeney in 1865 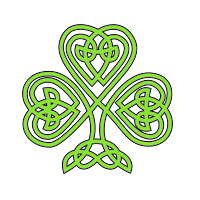 Posted by SallySearches at 6:50 AM