Sometimes while researching, a fact catches my eye that I don't expect. Such is the case with my great-great-grandfather, Milan FREDERICK. I first started on this line in the days before instant computer access to records. At the time, I was living in Michigan and could immerse myself in a terrific local collection of genealogy records at the Grand Rapids Public Library. One of the microfilms I came across contained the agricultural census returns that were part of the State of Michigan census of 1894.

An agricultural census (sometimes called a non-population census) is a detailed look into the 19th century family farm. The 1894 Michigan census inquired after facts in 114 different categories. 114! They include: acres of land owned, its development, use and value; types of livestock; number of ditches and fences; labor hours; poultry and dairy products made and sold; wool sheared; grains produced and sold; feed grown for livestock; and various other crops grown including flax, hops, tobacco and celery. For anyone with rural ancestors, these agricultural returns are an unexpected and fascinating glimpse into the inner workings of the family farm.

So besides being a farmer in Ingham County, Michigan, how did my ancestor Milan fit in? In 1894, he WAS the agricultural census taker!

Now I have no shortage of Milan's signature!

Biographically, Milan was born 5 February 1853 in Shiawassee Township, Shiawassee, Michigan, to William FREDERICK and Nancy ACKLEY. On 10 November 1885, he married Laura Ann MAXSON and they had three children: Bertha May, Lulu Gertrude (my great-grandmother), and Earl Milan. He died on 4 May 1919 and is buried in Rowley Cemetery with all of his family. 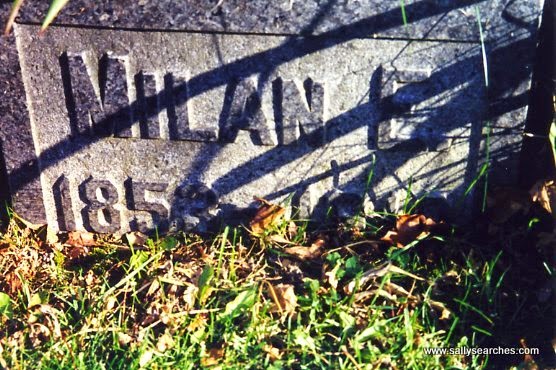 Milan's page in my database